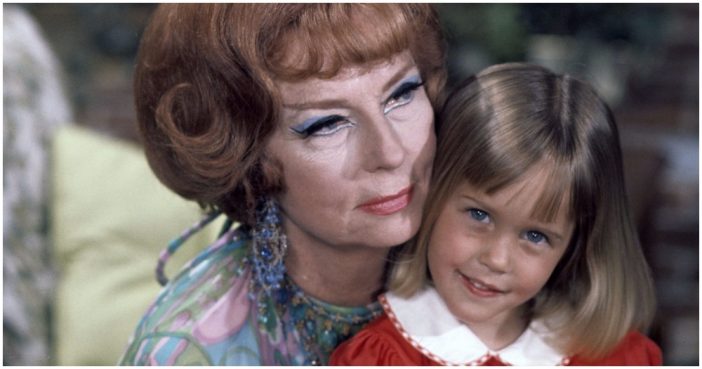 If you’re familiar with the series of the 1960s and 1970s, where a witch marries an unsuspecting normal, everyday mortal and keeps using her magic without his knowledge (and later against his protests), you’re probably familiar with little Tabitha Stephens. Her arrival as the daughter of Samantha on Bewitched in the late second season episode “And Then There Were Three” was a pivotal turning point in the series (marking the first time Darrin embraced his mother-in-law as well as the first time he met Samantha’s lookalike cousin).

Tabitha was thereafter the main character, with her own plot-driven episodes, all the way to the last season in 1972. But what happened to the girl best-known for playing Tabitha (in 103 of Tabitha’s 119 appearances)? Buckle up, here’s what little Tabitha Stephens, known in real life as Erin Murphy, looks like and is up to now.

Erin Murphy was born on June 17, 1964, in Encino, California and she landed quickly in the spotlight. At just 11 months old, Murphy booked her first gig in a Folgers coffee commercial and then did a laundry detergent commercial with Ronald Reagan. She’s the adorable baby, if you couldn’t tell. But Murphy was meant for more than commercials, even as a baby.

Just before she was 2 years old, she and her fraternal twin Diane got the role of Tabitha. Even though she shared the part at first, it was Murphy who was used for all of the close ups while her sister Diane was used for cutaway shots. Murphy loved the spotlight. Her sister? Not so much. “From the time I was a baby, I love it,” Murphy told ABC News. “I liked the lights and loved being on my set. My sister used to cry when they would bring her on set. Even now she hates it.”

As the girls got older and started looking less alike, Murphy was the obvious choice to keep the character going. Because she was with the show and with the cast for so many seasons, they were like a second family for her. Speaking of her costars, she told ABC News, “I always called her ‘Mantha Mommy, because I couldn’t say Samantha, and I called Dick Sargent, Darren Daddy. That’s what I knew them as. They really were like parents to me.”

She kept busy after Bewitched

When Bewitched ended and its final episode aired on March 25, 1972, Murphy wasn’t yet 9 years old. While most kids that age don’t know what it’s like to have a job, much less be out of one, Murphy was the perfect age to take on new work. In 1973 she made a guest appearance as Molly Craig on the season 19 episode of Lassie called “The Visitor” and then quickly made her way back to more commercials. In an interview with Life After 50 magazine, Murphy said, “I did over 80 commercials up until I was in junior high. By then, I kind of lost interest, because I was into things like cheerleading and school activities.” In the photo above, Murphy can be seen in one of her many commercials, this one for Barbie.

Murphy attended El Toro High School in Lake Forest, California and insists that her high school experience was relatively normal, but acknowledges that what she calls normal might be just a little bit different from what other people call normal. Strictly from the outside, however, it does seem pretty normal (though full of accomplishments and activities).

Not only was Murphy a cheerleader (good thing since that’s one of the things she gave up acting in commercials for), she was also in her high school dance production and crowned Homecoming Queen. Murphy graduated from El Toro in 1981, but according to all the odd jobs she did afterward, which we go into in the next slide, it seems she wasn’t quite sure what she wanted to do next.

Page Page 1 of 5
Previous article: Guy Uses 42,000 Matches To Build A Giant Sphere And Then Sets It On Fire
Next Post: Mitzi Shore, Comedy Store Owner And Mother Of Pauly Shore, Dies At 87