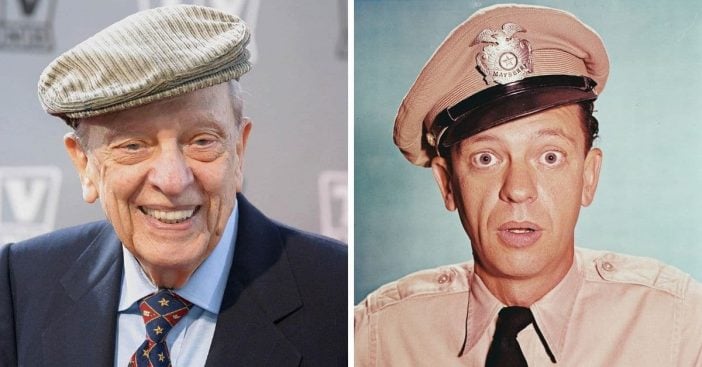 Don Knotts is a legendary actor best known for his role as Barney Fife in The Andy Griffith Show. Knotts won five Emmy Award for Best Supporting Actor and the show certainly wouldn’t have been the same without him. He also enjoyed success on the big screen in films such as The Incredible Mr. Limpet, The Ghost and Mr. Chicken, and The Reluctant Astronaut.

Knotts remained pretty busy until his death in 2006, even doing some voice acting until the year before he passed away. He captured the hearts of many and there is probably not a soul who lived during The Andy Griffith Show that doesn’t know his name. Knotts led a very full life and wore many hats throughout his years. It’s interesting to look back on the things about him fans may have missed.

Don Knotts certainly had his fair share of struggles in his early life. He was the youngest of four sons and his father William had a nervous breakdown at the prospect of raising him. William also suffered from schizophrenia and alcoholism and was said to have threatened Knotts’ with a knife. Growing up during the Great Depression, Knotts’ family was pretty poor. As he got older he began taking up jobs to earn money such as…

2. His Stint As A Ventriloquist

Knotts first took up entertaining as a ventriloquist, performing at various church and school functions in his home town of Morgantown, West Virginia. His Dummy was named Danny “Hooch” Matador but their relationship must have been turbulent. Eventually, Knotts ditched ventriloquism and allegedly threw Danny into the South Pacific.

3. He Was A Decorated Soldier

Knotts served in the U.S. Army from 1943-1946. He was a highly decorated non-combatant, achieving the rank of Technician Grade 5 (the equivalent of a Corporal) at the time of his discharge. A veteran of the Second World War, Knotts was notably given the World War II Victory Medal, Asiatic-Pacific Campaign Medal, Honorable Service Lapel Button, and a Marksmanship Badge.

Andy Griffith and Knotts formed a strong friendship while on The Andy Griffith Show that lasted their whole lives. Griffith was even so impressed by Knotts’ ability to make people laugh that he felt that Barney should have the funniest lines while he played the straight man. However, he was also constantly pulling practical jokes on Knotts, to his annoyance. Griffith even mockingly gave him the nickname “Jess” after Knotts’ first name “Jesse” which he hated.

5. Received Bullets In The Mail

A running gag on The Andy Griffith Show was Barney’s incompetence with firearms. After so many misfires, Andy eventually instructs Barney to carry his gun unloaded with a bullet in his shirt pocket.  Fans either as a joke or out of sympathy for Knotts’ character sent him real bullets in the mail. Poor Barney!

6. Expected The Andy Griffith Show To End After Five Seasons

The producers of The Andy Griffith Show had originally planned on ending the series in 1965, but Griffith relented to network pressure and agreed to keep the show on for several more years. Unfortunately, Knotts had already made up his mind to sign a contract with Universal Pictures to pursue a more film-oriented career. He later explained that the decision to leave the show was an incredibly difficult one.

7. Success On The Big Screen

Although Knotts left The Andy Griffith Show to focus on his film career, his time on the show definitely had an impact. One of his films with Universal Pictures called The Ghost and Mr. Chicken was actually inspired by an episode of The Andy Griffith Show called “Haunted House.” In Knotts’ first starring role in The Incredible Mr. Limpet, he played a man who transforms into a talking fish in order to help the U.S. Navy. He enjoyed success as he continued his acting career on the big screen.

8. Style and Suave Were Not In Short Supply

Although Barney Fife is almost always dressed in his police uniform, Knotts still managed to be known for having a unique sense of style. He often rocked a straw hat and coat, and his facial features gave him a distinctive look. Despite his comedic roles, he also got along pretty well with the ladies. Knotts was married three times and his daughter Karen joked in an interview with People Magazine, “He was really quite the ladies man, especially between marriages.”

9. His Role In Pleasantville Almost Went Someone Else

As the years went by, Knotts was able to adapt to new roles and challenges in comedy. In 1998 he played the mysterious TV repairman in the film Pleasantville. Surprisingly that role almost went to another comedy legend, Dick Van Dyke. Although Van Dyke is an excellent talent in his own right, we’re glad the role went to Knotts in the end.

10. A Statue Of Barney Fife Was Destroyed In Mount Airy

After Knotts’ death in 2006, Tom Hellebrand commissioned a statue to be made of Barney Fife in  Mount Airy, N.C. The city was the inspiration for The Andy Griffith Show and the perfect setting for a statue in his honor. Unfortunately,  the statue had to be taken down before it was even fully completed. Paramount, who owned the rights to the show, withdrew its approval for the statue made in Knotts’ likeness. Luckily a new statue in Knotts honor was unveiled in 2016. Regardless, it doesn’t take a statue to remember and hold dear the hilarious career of Don Knotts.

Click for next Article
Previous article: Netflix Announces Animated ‘Good Times’ Series Is In The Works
Next Post: Betty White Was Best Friends With This “Dynamite” Comedian