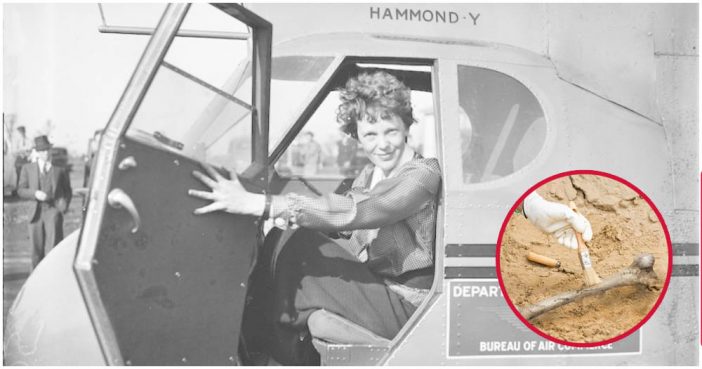 Bones discovered on a Pacific island in 1940 are “likely” to be those of famed pilot Amelia Earhart, according to a US peer-reviewed science journal.

Earhart, her plane, and her navigator vanished without a trace in 1937 over the Pacific Ocean. Many theories have sought to explain her disappearance.

The decades-old mystery over the disappearance of Amelia Earhart has been cracked with 99% certainty, according to a top scientist probing the case.

The famous aviator disappeared somewhere over the Pacific Ocean during an attempted round-the-world flight in 1937.

Earhart, her plane, and her navigator, Fred Noonan, were never found, and the mystery of what happened to them continues to fascinate to this day.

But now an expert on skeletal biology, Richard Jantz of the University of Tennessee in the US city of Knoxville, believes he has cracked the case – claiming bones found on a Pacific island are ‘99% likely’ to be hers.

The decades-old mystery of Amelia Earhart (pictured in 1936, a year before she vanished) has been cracked with 99% certainty, according to a top scientist probing the case.

In 1940, bones were discovered on Gardner Island – now called Nikumaroro (pictured) – 400 miles south of Earhart’s planned stopover on Howland Island. An expert on skeletal biology now believes the bones are ‘99% likely’ to be Earhart’s.

The International Group for Historic Aircraft Recovery (TIGHAR) has been investigating the theory that Earhart landed on Nikumaroro – now part of Kiribati – since the 1980s and has found a pocket knife (left alongside a completed version) which it says is of the same type inventoried aboard Earhart’s plane.

They were then sent for analysis in British Fiji, where Dr. David Winn Hoodless took measurements before the bones were lost.

Now, using those measurements, Dr. Jantz has compared the bones to the probable dimensions of Earhart’s and reached a remarkable conclusion.

‘What I can say scientifically is that they are 99% likely to be her,’ he said.

Page Page 1 of 3
Previous article: Rare: Super 8 Footage Of Jim Morrison Revealed
Next Post: Name the 8 Letter Word. It’s Not as Easy as You Might Think!