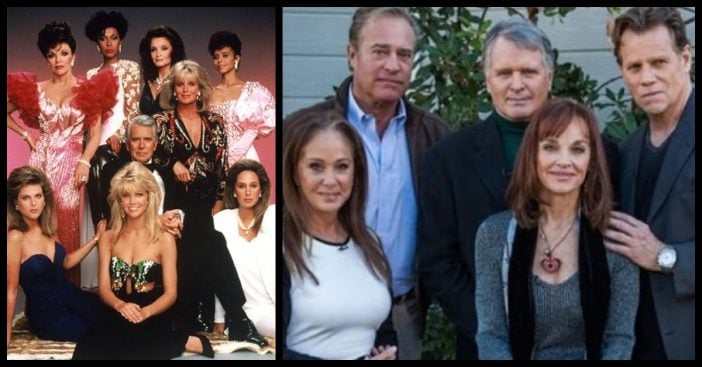 When people think of soap operas, most conjure up long-running daytime programs like General Hospital & Days of Our Lives. But night-time soaps are just as delicious, and one of the most successful of all-time is Dynasty. We were treated with 220 episodes of the trials and tribulations of two feuding families, the Carringtons and the Colbys, both oil-lucrative households located in Denver, Colorado.

After a modest 19th placing in ratings its first year, Season 2 saw a huge bump in viewers, landing #5 of all the networks, right behind the mustache of Magnum P.I., Dynasty regularly competed against fellow primetime soap opera: Dallas, and by spring 1985, it was the No. 1 show in the U.S. Let’s take a look at the cast of Dynasty and see what they’re up to today!

Forsythe’s career began in 1943 with an uncredited role in the Errol Flynn-led film, Northern Pursuit. His first big break was in 1955’s Hitchcock-directed picture, The Trouble With Harry, where he co-starred alongside Shirley MacLaine in her film debut, as well as an even younger Beaver Cleaver: Mr. Jerry Mathers. And It was smooth sailing from then on, even achieving his own show The John Forsythe Show, a decade later in ‘65.

Even if you simply heard John’s voice, it would stop you in your tracks, as he gave life to the infamous Charlie with those beautiful angels! That’s right! John voiced Charlie for the TV show as well as the reboots in the early 2000s. His career finished on a full circle, as Charlie was the final role of John’s in 2003 as he retired from the limelight. Forsythe passed away in 2010 at age 92 from pneumonia but we’ll always remember him, partly, because of Blake Carrington!

Linda played Blake’s new wife. Her career began In 1960, at 18 years old, with multiple episodes of The Adventures of Ozzie and Harriet.  Linda’s first break was a doubly-big one. A series staple in the western, titled Big Valley, where she got to act alongside ‘the 6 Million Dollar Man’, Lee Majors.

Following Dynasty, the oil reserve had dried up, along with it, her string of successes. She decided to retire in 1997, because as she put it: “After Dynasty, I wanted a reality check. I wanted to get in touch with real life, you know?” Linda moved to Washington state and mixed things up, literally, as she began getting involved in the culinary arts. Even going as far as competing on Gordon Ramsay’s competitive TV show, Hell’s Kitchen in 2009.  But in 2020, she’s back, baby! In her first project since ‘97, she’s 3rd Billed in Swan Song, a film that will come out late 2020, or early 2021. And we’re thrilled to watch Linda again on the big screen!

Remember that season 2 ratings spike? Enter: Alexis Colby, otherwise known as Blake’s vengeful and scheming ex-wife added to spice things up. Collins began acting in her birth-country of England in 1951, & in ‘54 she was chosen by American director Howard Hawks to star in Land of the Pharaohs. Both the film & Collins were fantastic and led to 20th Century Fox courting the young actress and bringing her to Hollywood. After more success in films, like 1958’s The Bravados starring her and Gregory Peck, she began venturing into television and worked both mediums until Dynasty’s dynasty began.

After Dynasty, she continued working throughout the ’90s and 2000s with recurring roles in Guiding Light, The Royals, & even American Horror Story in 2018.  She has a movie in pre-production, titled Unforgettable, where she gets to act alongside Tippi Hedren, two classic Hollywood bombshells. Did we mention she’s 87 years old? Incredible!

Gordon Thomson’s expansive career began in ‘69 when he was 24 with a role in the film Explosion.  You may remember a young Gordon from 1971’s Tales from Muppetland: The Frog Prince, a tv movie in which he played Sir Robin the Brave alongside Kermit the Frog and company! Being Canadian he worked with the Canadian elite, once in a stage production of Godspell opposite Gilda Radner, Martin Short, and Eugene Levy. His first, true recurring role came in 1981 with the soap-opera Ryan’s Hope. The education paid off as he landed Dynasty the following year.

Gordon really is a soap-opera Titan. One year after Dynasty’s conclusion, he landed Santa Barbara where he would act in 344 episodes. Following that soap, he hit gold again with 226 episodes of Sunset Beach in 1998, and it seems daytime television can’t get enough of him. He’s been on The Young and The Restless, as well as Days of Our Lives in 2009. At 75 years old, he’s still active in the business and notably, Gordon came out as gay in 2017.

John James began playing hunky Jeff Colby on Dynasty in 1981, & really was in his element in a night-time soap. His first acting job was on one of the longest-running soap operas of all-time, Search for Tomorrow.  He made small guest-spots on hit shows like Fantasy Island and The Love Boat before getting his first big break as Jeff Colby! John would extend this Dynasty role in the spin-off appropriately named The Colbys from 1985 to 1987, which actually aired while the original Dynasty show was still on the air.

After Dynasty, the ‘90s were very slow, besides a role in a 1991 Perry Mason TV movie, but nothing really substantial. But then things halted entirely until he went back to his bread and butter, the soaps. In 2003 John began a recurring role on As The World Turns that continued for 5 years here and there, and in 2006 he was cast as Jeff Martin on All My Children where he appeared on 34 episodes. He may be gearing up for a return because he recently appeared in a sci-fi film called Axcellerator which was released in 2020 to decent reviews!  He is 64 years old and lives on a 230-acre farm in Cambridge, NY where he works with a local theatre group!

Nader joined the show in 1983, but he was out in the sun making pictures two decades before that, as he was in several of the Beach Party films. Although the ‘60s were blazing hot, things cooled off until the ‘80s brought Dynasty. After appearing in The Flash in 1991, he was cast on the daytime drama All My Children for which he would enjoy 10 years of work before an arrest changed everything.

In 2001, Michael was involved in a large-scale drug bust in New York City’s East Village resulting in a felony drug charge after he was caught selling cocaine to an undercover detective. ABC fired the actor and Nadar sued unsuccessfully multiple times until finally, ABC gave Nadar one more chance to conclude his All My Children Role and in 2013 had 42 more episodes. Nader has been out of Hollywood since that reunion and is currently 75 years old.

Coleman took over the role of Steven Carrington after two seasons and Dynasty showrunners plucked him from another Soap as he was on Days of Our Lives the previous year. Jack has worked constantly since, his biggest role since being a Carrington was in 2006 in the NBC hit show, Heroes.

He was also very funny joining the cast of The Office has Angela’s pretty-obviously gay husband. We last saw him in the 2019 film, Rattlesnakes. But television guest-spots are aplenty for the actor and I’m sure we’ll be seeing the 62-year-old Coleman in another hit show soon.

Not many people get one recurring role on a hit tv show, two is incredible. Two filmings at the same time is even more special and that’s what Heather Locklear could do. Locklear hit the scene in 1980, and by 81, was a regular in the Shatner-led TJ Hooker, as well as our Sammy Jo in Dynasty. These along with roles in The Love Boat and Fantasy Island made Heather one of the most popular TV actresses in the 1980s.

She followed up her role as Krystle’s vixen of a niece by playing the rebel Amanda on Melrose Place. Following that was Spin City with Michael J Fox, and it appeared she could do no wrong. Sadly shaky personal relationships and substance abuse began to affect her career in 2009. These troubles would follow her all the way to 2018, when she was arrested again, for two misdemeanor counts of battery. Following that release, she was hospitalized in a suspected case of an overdose. Locklear has since become sober and recently got engaged to her high school boyfriend. She is also back in action and is filming a movie called Zombie Brothel. Although I may not see that specific movie, at 59 years old, we’re glad Heather is sober, happy, and working.

Pamela Sue Martin started her career soaking from success, being part of the 1972 hit film, The Poseidon Adventure. Many remember her from The Hardy Boys/Nancy Drew Mysteries, as she played Nancy Drew alongside two of the biggest stars of the time, Shaun Cassidy and Parker Stevenson.

Pamela was part of Dynasty until 1984 when she left the show on her own accord. After parting ways with the Colbys, she made appearances on several series like Strong Medicine, That ’70s Show, and even hosted Saturday Night Live in 1985. We last saw Pamela in a respectful cameo of sorts, with one episode in the 2019 version of the Nancy Drew series. At 67 years old, I don’t think we’ve seen the last of her.

If this cast rewind makes you miss Dynasty, be sure to check out the revival over on the CW Network. Who was your favorite character on Dynasty? Do you remember a specific episode that you couldn’t stop watching!? Let us know.