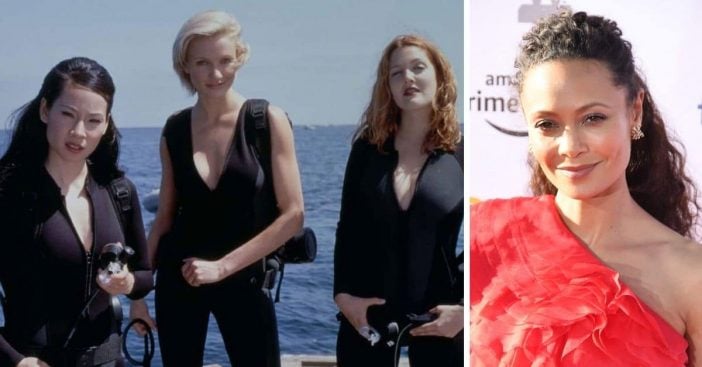 Actress Thandie Newton is speaking out. She recently admitted that she was approached to star in the 2000 Charlie’s Angels movie. However, after having meetings with the director and former head of Sony Pictures, she decided it was better to stay away from the project.

Thandie revealed, “One of the biggest movies I didn’t end up doing was because the director said to me, ‘I can’t wait for this. The first shot is going to be … You’re going to think it’s like yellow lines down a road, and you pull back and you realize it’s the stitching because the denim is so tight on your ass it’s going to look like tarmac. I was like, ‘Oh, I don’t think we’re going to go down this road together.'”

Thandie also claims that former Sony Pictures head Amy Pascal made racially insensitive remarks to her. She said, “She’s [Amy] basically reeling off these stereotypes of how to be more convincing as a Black character. Everything she said, I was like, ‘Nah, I wouldn’t do that.’ She’s like, ‘Yeah, but you’re different. You’re different.’ That was Amy Pascal. That’s not really a surprise, is it? Let’s face it: I didn’t do the movie as a result.”

RELATED: See The Photos From The ‘Charlie’s Angels’ Stars Reunion

Amy stepped down in 2015 after some emails got leaked. In the emails, she discussed whether Barack Obama liked movies better with Black casts. She later issued an apology for those emails and stepped down. Now, she apologized again after hearing Thandie’s statement.

Amy said, “While I take her words seriously, I have no recollection of the events she describes, nor do any of her representatives who were present at that casting session. I’ve long considered Thandie a friend; I’m thankful that I’ve had the chance to make movies with her; and I hope to work with her again in the future.”

Thandie also recently spoke out against Tom Cruise. Watch below:

Previous article: Netflix Is Airing Old Episodes Of The Classic Game Show ‘Supermarket Sweep’
Next Post: Janitor Who Walks Miles To Work Breaks Down In Tears When Coworkers Do This For Him