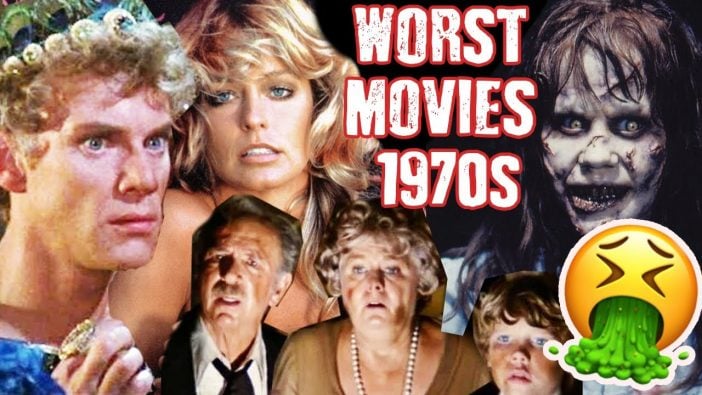 Everyone can agree that bad movies are fun. Whether we watch them to laugh or to cringe, there’s something enjoyable in watching an on-screen trainwreck. During every decade there are some movies that are so bad, so laughably atrocious, that they live on in the cultural zeitgeist long after their artistic achievements merit. Think Plan 9 from Outer Space in the ’60s. Caddyshack 2 in the ’80s. Waterworld in the ’90s.

We all remember these movies precisely because they were so awful that they were rendered unforgettable. And the 1970s had one of the best crops of hilariously bad movies of all. Silly disaster movies, unscary horror flicks, laughless comedies – this decade had everything! Alright, get your popcorn ready:

When the spectacle and destruction of disaster movies fail to overawe an audience, often all you are left with is shoddy character development and a silly plot. In other words, a recipe for hilarity. This is certainly the case when it comes to 1978’s The Swarm. Containing the unforgettable line “Bees. Bees. Millions of Bees!,” The Swarm focused on Michael Caine’s efforts to stop a massive, deadly honey bee invasion of Texas.

Famed disaster director Irwin Allen employed an estimated 20 million bees during filming, but it seemed audiences just weren’t going to be brought to the edge of their seats by these normally docile pollinators. Critic Gene Siskel wrote that after seeing Star Wars the previous year, The Swarm was “surprisingly flaccid in its thrills.” It seemed that people agreed, as this disaster of a movie only made back a third of its $21 million budget, and, as The Sunday Times put it, was certainly “one of the worst movies of the ever!”

They say you either die a hero or live long enough to see yourself become the villain. In the 1978 flop Sextette, Mae West was certainly verging upon villain territory. West was one of the biggest film stars and sex symbols of early Hollywood, and Sextette attempted to capitalize on that.
The film’s plot largely revolved around the escapades of a group of young, attractive men all desperate to sleep with West’s character. Unfortunately, by 1978 Mae West was 84 years old, starring in her final film ever, and had to have her lines read to her through an earpiece under her wig.

Audiences and critics alike found this to be a tad unrealistic, with the critic Rex Reed commenting that the film was “a total, unbearable bomb… more like a training film for retired French whores.” Sextette was unable to find a distributor, and despite having an all-star cast including Tony Curtis, Dom DeLuise, Timothy Dalton, George Hamilton, and Ringo Starr, it only grossed $50,000 at the box office, which works out to an abysmal 1% of its budget. Not surprising for a film the Chicago Reader described as being “one of the world’s all-time worst movies.”

Take one of the most beloved and successful horror movies of all time, bring back your principal actors for the sequel, and presto: a recipe for magic! Except The Exorcist II: The Heretic was about as far from magic, and for that matter horror, as you can get. While Linda Blair and Max von Sydow reprised their iconic roles from The Exorcist, neither the original writers nor the director was retained. Without strong leadership, the movie was rewritten at least five times during production, with the result being an incomprehensible plot and a jumbled mess of a movie. William Friedkin, the director of the original Exorcist, stated it was “as bad as seeing a traffic accident. A freaking disgrace.” And while The Exorcist II ended up making $30 million at the box office, that paled in comparison to the original’s massive haul of $112 million, and severely undershot expectations. Surely fitting for a movie critic Gene Siskel described in a 0-star review as the “stupidest major movie ever made.”

Movie musicals are a very divisive genre. Some love them, some love to hate them. This is not true of 1973’s Lost Horizon, however. Everyone simply hated it. Lost Horizon focused on a group of plane crash survivors who stumble upon the mythic realm of Shangri-La. High in the Himalayan mountains, Shangri-La in this case is a paradise where the weather is always perfect and you live forever. Sounds like a feel-good musical to me, right? Wrong. The movie was an update of an earlier 1930s film, and the unfortunate racial aspects of the original are kept intact. The New Yorker noted that “paradise” was populated solely by middle-aged white people, excepting the servants, who were all of the Eastern-Asian origins. On top of this cringeworthy-ness, the musical numbers and dance scenes were just bad, almost ending the career of songwriter Burt Bacharach. Gene Siskel wrote, “Nothing works. Not the lyrics. Not the dancing. Not the script.” When nothing works in a movie, it’s definitely gotta be one of the worst of the decade!

Start with a critically acclaimed late 1960s counterculture novel as your source material. Cast two of the decade’s most beautiful bombshells, Raquel Welch and a young Farrah Fawcett in her first-ever film role. Bring Mae West out of retirement for her first film role in 27 years. What could possibly go wrong? In short, everything! 1970s Myra Breckinridge was about a man who undergoes a sex-change operation in order to scam his uncle out of $500,000. Cue hijinks. Unfortunately, the script underwent more than 10 re-writes along the way, eventually removing anything worthwhile from the original novel. Critic Gene Siskel wrote, ”Gratuitous nudity and oafish direction have replaced wit and mystery.” When divorced from the source material’s original intent the film’s subject matter, with troubling depictions of rape and sexual coercion, did not go over well. In fact, Time Magazine said, “’Myra Breckinridge’ is an insult to intelligence and an abomination to the age.” Harsh words for undoubtedly one of the decades worst movies.

Sometimes an action movie is so bad, so excruciatingly earnest, that it ends up becoming accidentally funny. And this is very true for the next movie on our list, The Concorde… Airport ‘79. Fourth in the celebrated 1970s Airport franchise, 1979’s The Concorde failed to live up to its predecessor’s action-packed heights. The movie takes place on a supersonic jet that an evil arms dealer is attempting to destroy with corrupt mechanics, fighter jets, and surface to air missiles. The action was completely over the top, with the Concorde eventually landing safely with more holes in the plane than the actual plane left. Box Office wrote that the film was “so silly that it’s actually entertaining” and Variety labeled it “unintentional comedy.” The movie failed to make back its budget and effectively killed the Airport franchise. Despite accidentally generating laughs, The Concorde… Airport ‘79 completely missed its mark and was undoubtedly terrible!

1979’s Caligula attempted to update the genre of grandiose historical films by pumping a ton of sex and violence into a period political piece. The movie focused on the Roman Emperor Caligula’s incest and murder driven rise to power and featured an A list cast, including Malcolm McDowell, Peter O’Toole, and Helen Mirren. And they might have gotten away with it if it wasn’t for those meddling kids! Those kids in this instance being the producer of the film, Penthouse Magazine. After production on Caligula wrapped, Penthouse edited the movie significantly, changing its tone and style, and burying a message of political satire under numerous scenes of unedited pornography. This was done without the knowledge of the film’s writer or director, who later disavowed the finished product, and led to outrage and bans in countries across the world. Roger Ebert wrote that it was “sickening, utterly worthless, shameful trash.” While certainly one of the worst movies of the 1970s, for those willing to look past the unsimulated sex and violence, Caligula has gained a cult following, with star Helen Mirren stating it’s “an irresistible mix of art and genitals.”

1972’s Poseidon Adventure was everything a blockbuster disaster movie was supposed to be. Exciting, stimulating, and visually stunning, it was a roller-coaster ride about people desperately trying to escape a sinking luxury ocean liner. However, the same can not be said about its sequel, 1979’s Beyond the Poseidon Adventure. This film is the second movie on our list to pair director Irwin Allen with actor Michael Caine, and just like The Swarm, the biggest disaster here is this terrible movie sequel. And the word sequel is even stretching things, as the movie had almost the exact same plot as the original.

Variety wrote it was a “virtual remake, with none of the suspense and excitement.” Gene Siskel added that it was like watching the original except “with dialog that could be written by a 1st grader.” In fact, the movie was universally panned and has an astounding 0% aggregate on Rotten Tomatoes. Ouch.

It should go without saying that two of the top requirements for being in a musical are an ability to sing and dance. While this fact might seem obvious, it clearly wasn’t to the producers of 1975’s At Long Last Love. At Long Last Love is a 1930’s style musical full of glitz, glamour, and a fantastic score of Cole Porter songs that unfortunately had Burt Reynolds and Cybill Shepherd cast in the leading roles. While both talented actors, neither Reynolds nor Shepherd had any background in musical theater, and this inexperience definitely showed. Los Angeles Magazine wrote that “Burt Reynolds dances like a drunk trying to kill cockroaches,” and the Chicago Tribune added that, “the musical numbers are a mess. Nobody knows how to sing. Nobody knows how to dance.” This inability by the lead actors to sing and dance understandably ruined the movie, and audiences stayed away, with the film not even making back half its budget at the box office. Justifiable for a movie Esquire described as “the worst movie musical of the decade.”

The film The Bad News Bears Go To Japan is about a down on his luck crook who thinks managing an unruly kids baseball team will help get him out of trouble. If you think this sounds suspiciously similar to the original Bad News Bears, you’d be correct. Except now they’re in Japan! This third film in the Bears franchise cast Tony Curtis in the coach role, but other than that the formula didn’t deviate much from the original two movies. However, once you tell the same jokes for the third time, things start to feel a bit stale. The Washington Post wrote that “every aspect of the premise that might supply comedy or melodrama is neglected in favor of lazy self-imitation.” One of the film’s own actors even described it as “the worst movie ever made.” Critics everywhere agreed, and the film has a measly 6% rating on Rotten Tomatoes!

Woof. From 1 to 10, every movie on this list certainly was a stinker. Whether it was the plot, acting, direction, or a combination of all three, these movies just didn’t work – which is why we remember them to this day. But what movies did we miss?