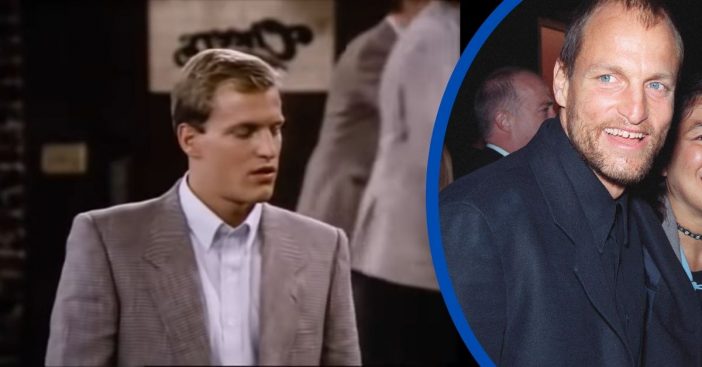 Actor and playwright Woody Harrelson will turn 60 on July 23, 2021. Throughout his life, he has earned numerous accolades. He also won a place in many people’s hearts for his work in some of our most nostalgic favorites.

To celebrate both his birthday and work, let’s look back on Harrelson through the years in some of his most memorable roles. He first really entered everyone’s radars on Cheers, which really allowed him to shine. Jump forward a few decades, and he touched upon our fondness for quality shows again in a recreation of All in the Family. In between, he kept making a name for himself with ease.

Born on July 23, 1961, Woodrow “Woody” Tracy Harrelson got his biggest role early on. He joined NBC’s sitcom Cheers in 1985. Harrelson’s inclusion followed a big shuffle sparked by the sad passing of Nicholas Colasanto. Colasanto played Coach (who, you’ll recall, Harrelson’s character Woody Boyd was a friend of), but unfortunately passed away in February 1985.

So, Harrelson’s character Boyd replaced Coach and became a bartender. This put Harrelson right in place to remain with the show for the last eight seasons, which ran from 1985 to 1993.

The return of great things

When something isn’t broken, don’t fix it. Cheers became a clear hit, so much so, that it got a spinoff known as Frasier. Who should return but Woody Harrelson.

The show enjoyed 11 seasons and paid careful homage to its roots. This meant that viewers got to see familiar faces. Fortunately, that included Harrelson, who guest-starred on the show in 1999. There, he reprised his role as Boyd, “a friend of Coach” desperately wanting to hear a bartender with a joke at the ready.

When stars collide, everyone wins

Harrelson took a break from TV stardom to appear in his 2009 war drama The Messenger. He promoted the movie through various platforms, including an appearance on The Colbert Report. But he always also got to really shine on television shows – and so many producers wanted him there. For example, 2001 saw him in many episodes of Will & Grace as boyfriend Nathan.

This trend continued into the following decade when Woody Harrelson and Matthew McConaughey combined their star power to solve crimes on True Detective. He played Louisiana cop Marty Hart for the first season of the HBO show.

Nothing indecent about this Indecent (Casting) Proposal

Harrelson’s movie credits do deserve respect and recognition, though, especially as we celebrate his birthday and the remarkable accomplishments he’s made. One particular popular title that comes to mind is Indecent Proposal, which saw him acting alongside Demi Moore and Robert Redford. The dramatic film turned out to be a box office success. In total, it netted around $265,000,000.

His success did not come just in the form of monetary splendor, though. For instance, his work in The People vs. Larry Flynt earned him a Golden Globe Award nomination. It also got him an Academy Award for Best Actor. And yes, his iconic work in Cheers got recognition too, in the form of a Primetime Emmy Award for Outstanding Supporting Actor in a Comedy Series.

If he himself did not get an award or nomination, work with him involved did, such as the war film The Thin Red Line. The next generation even has reason to love Harrelson’s acting work, as he played the important role of Haymitch Abernathy in all movies in The Hunger Games series. Woody Harrelson became such an important part of our nostalgic memories that he also starred as Archie Bunker in ABC’s recreation of All in the Family. Be sure to check out the fun video of it below! Happy birthday, Woody Harrelson! Thank you for a career that spans decades – and counting!

See what Woody & the Cheers cast is up to today! 🙂