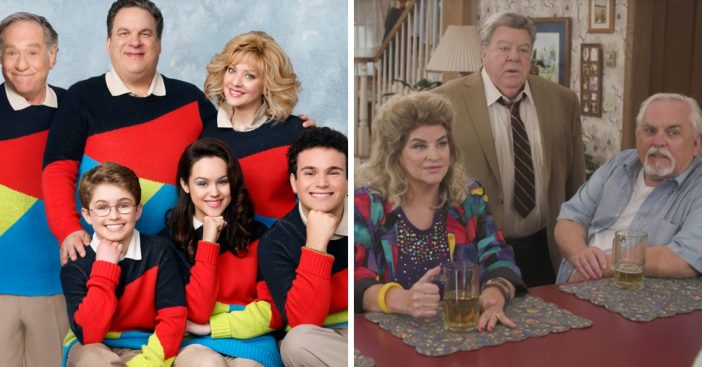 ABC has been airing “Cast From the Past Week,” where cast members from nostalgic television shows join new shows for an episode. Two of our favorite collaborations are Blue Brothers 2000 on The Conners and Cheers on The Goldbergs! It is so exciting to see these stars come back together on television.

It is especially exciting because the cast of Cheers reunites tonight on The Goldbergs! But first, let’s take a look at which stars had an incredible reunion in last night’s episode of The Conners. Did you watch it last night?

John Goodman currently stars on The Conners, which is a spin-off of Roseanne In the new episode, he is reunited with Dan Aykroyd. They worked together on Blues Brothers 2000. In the episode of The Conners, the two play poker buddies.

The episode is called “The Preemie Monologues,” and the description shares, “Harris is forced to confront Darlene about her lifestyle, while Jackie involves herself in other people’s problems to avoid confronting her own. Meanwhile, Becky is overwhelmed by the costs of raising a baby, so her family steps in to help.”

The episode aired on Tuesday, October 8, so check it out On Demand wherever you watch television.

The stars of the iconic ’80s show Cheers reunites on tonight’s episodes of The Goldbergs. Kirstie Alley, Rhea Perlman, John Ratzenberger, and George Wendt all appear in the episode.

The episode is called “Food in a Geoffy” and the description shares, “When a job for Geoff Schwartz’s new food delivery service goes awry, it’s up to Murray and Geoff to race all over Jenkintown in search of an important cheesesteak. Along the way, a handful of local customers (Kirstie Alley, Rhea Perlman, John Ratzenberger, and George Wendt) are anything but helpful. When the search finally ends, Beverly invites them over; and even though it’s the Goldbergs’ house, you might mistake it for a bar where everyone knows your name.”

Which episode are you more excited to watch? We love crossover episodes, especially when they feature a nostalgic cast! ABC is really into the nostalgic television lately and we are loving it. Check out a teaser for tonight’s episode below:

Will There Be More Live Nostalgia On ABC After ‘All in the Family’, ‘The Jeffersons’?

Previous article: Eagles To Perform ‘Hotel California’ In Its Entirety For 2020 Tour
Next Post: When You Can Watch ‘It’s The Great Pumpkin, Charlie Brown’ This Month