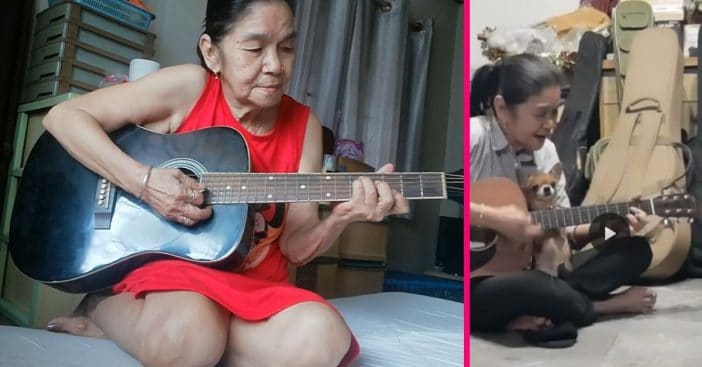 Hailing from Bangkok, Malinda Herman gained everyone’s attention with a simple formula. Her YouTube channel, Malinda Herman Official, offers viewers quaint videos of the grandma playing guitar with her beloved Chihuahua. Each video has a caption that offers the reader well-wishes and she herself wins people’s hearts by readily calling everyone “friends.”

But this story of viral success goes deeper than that. Playing the guitar and composing such lovely ’60s covers allowed Herman to reclaim some control over her life. Ever since life as she knew it changed forever, she struggled with her confidence. Putting herself out there and introducing the world to this kind, adorable grandmother helped her just as much as it helps viewers.

Malinda Herman fought against the odds

“I got into an accident about 20 years ago where my car flipped over,” Malinda Herman explained. “The impact from the collision damaged my nerves and the left side of my face became paralyzed.” She admits that looking at her closely reveals lasting proof of the accident. “I felt really terrible after the accident. For about two years, I didn’t let anyone see my face, I was ashamed,” she went on. “It was all bent out of shape and my eye left couldn’t properly close. I could speak but not well. I couldn’t chew food or anything.”

Medical professionals presented her only option of recovery as surgery. Malinda turned it down. Instead, she took a holistic approach to recover her vocal motor skills. She elaborated, “I did the boring A-E-I-O-U exercises for years, until one day, my son bought me a guitar and recommended I tried singing, because he knows I’ve loved to sing ever since I was young.” Miraculously, her son’s suggestion and her emotionally-driven efforts got her to 75% recovery.

Spreading joy and love to all, great and small

Loss came to Malinda Herman once more when her first dog passed away. Her hair salon noticed Herman’s grief and offered her one of the puppies they kept. They ended up being a match made in heaven and the iconic, wholesome duo became official. Before Herman started playing for millions on YouTube, she played for herself – and Jiw Jam, her dog, who ended up being an avid and attentive fan. As soon as she strums the first notes or sings the first word, Jiw Jam trots on over and gets a front-row seat. There, the canine calmly drifts into a peaceful state of mind while Herman performs.

it didn’t take long for the pair to become viral. Herman never expected such fame (She has 1.11 million subscribers as of July 16, 2020), but she’s glad. She experienced loss in heavy doses herself but found a reprieve; now, she wants to give others the same thing. “People are so stressed nowadays, I wanted to do something that could help them relax and feel better,” she revealed. She is prepared to provide ’60s music covers as long as people watch. Based on the comments, they’ll be watching for a long time. All responses note how wholesome the setup alone is, and absolutely adore how caring she is by calling them her friends. For a soothing end to a long day, watch her video below and peruse her YouTube page for more.