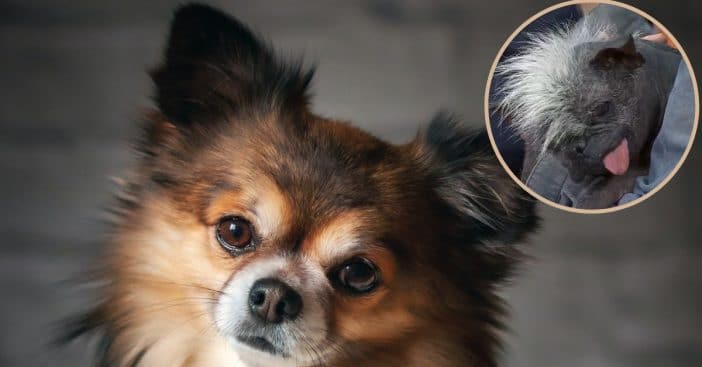 The dog which emerged as the 2022 World Ugliest Dog is a hairless Chinese Chihuahua mix known as Mr. Happy Face and was crowned on June 24, 2022. The dog was adopted by Janeda Benally in August 2021 from an Arizona shelter after his rescue from a hoarder’s house.

Janeda Benally Speaks About The Challenges Of Mr. Happy Face

The dog’s owner Janeda Benally said that when she adopted the dog, she was informed that Mr. Happy Face would live for about a month due to the fact that he was already old and suffered from certain health conditions.

Despite all of the seemingly huge problems, she made a decision to adopt the dog and care for him to the fullest. “He was the happiest creature that I had ever met, he wobbled up to me and chose me. I vowed that day, he would be so loved that he would never remember how awful his previous life had been,” she said.

Kerry Sanders Interaction With The Dogs

NBC Kerry Sanders was part of the five judges who decided the winner of the competition. He interacted well with all the contesting dogs, especially a Pekinese called Wild Thang, which gave him a reminder of the fictional Tribbie from Star Trek.

In agreement with the statement from Sanders, the owner said, “He’s a Tribbie; sometimes he’s just trouble.” According to Star Trek, Tribbie was a little animal covered with fur which had the ability to produce offspring at a very troubling speed, and Wild Thang’s only similarity with Tribbie is his mane.

The Purpose Of The Contest

The contest is open to all categories of dogs regardless of their backgrounds, ranging from those rescued from shelters to those raised by their parents. According to a press release, the contest was established to “celebrate the imperfections that make all dogs special and unique. It is not a big deal if any of the animals entering the contest do not have furs, are crossed eyes, or have duck waddles, as they can all enter into the competition to showcase their amazing peculiarities.”

Past Winners Of The Contest

Since its inception in the ’70s, there have been many winners, including Boomer, a French mastiff who won in 1996. Nana, a three-pound Chihuahua, won thrice and made a guest appearance on the cover of a RatDog album and twice on The Tonight show before her death in 2001.

The competition, however, could not hold in the years 2020 and 2021 due to the COVID-19 pandemic making Scamp the Tramp, a mutt with very unkempt hair which was taken off the streets in Compton, California and won the 2019 contest as the previous winner just before Mr. Happy Face is named the 2022 champion.

Click for next Article
Previous article: This Tweet From Ken Jennings Has ‘Jeopardy!’ Fans Riled Up
Next Post: The Cast Of ‘Quantum Leap’ Then And Now 2022