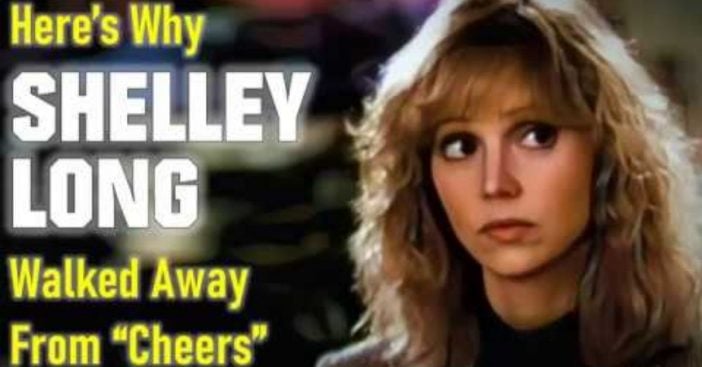 It takes a lot of gumption to up and walk away from one of television’s most popular programs but that’s exactly what Shelley Long did after the fifth season of the series which would run for another six seasons.  Why’d she do it?  We’ll get to that in just a minute, but first, let’s talk a little bit about Cheers.  Fun fact, the show wasn’t an immediate hit.  The ratings for the first season of the show were nothing to write home about and, if I remember things correctly, there was some concern regarding whether or not the show would be renewed for a second season.

On the show, Ted Danson played Sam Malone, a retired baseball player who is the main bartender for a warm and inviting bar in Boston where everybody knows your name.  Like all great TV shows, the entire cast is quite incredible.  But it was the romantic tension between Sam and waitress Diane Chambers, played by Shelley, that really made this show something special and so much fun to watch.  For most of those first five seasons, TV audiences wondered if Sam and Diane would eventually fall fully head over heels in love. Couple that with the fact that Danson and Long were so good together and well, you’ve got the makings of a blockbuster hit.

Why Shelley Long walked away from ‘Cheers’

Over the course of Cheers and its companion show, Frasier, Long was nominated for an Emmy Award six times for playing Diane Chambers winning the award once.

Her 1983 acceptance speech is the model for how to gracefully accept an award and acknowledge the efforts of your co-workers.  Quite frankly, it is a thing of beauty and can be seen in the clip below.

However, apparently as those five seasons progressed, things weren’t always as wonderful as Shelley’s acceptance speech would have you believe.

The problem, from everything that I can tell through extensive research, is that Shelley wasn’t all that much fun on set.  While others wanted to joke around and goof off a bit in between takes, Long, on the other hand, preferred to focus on the task at hand, preparing for the next scene often by herself away from the other cast members.  As you can guess that led to a bit of a separation between Shelley and the rest of the cast members who had grown quite close.

Preparing for her character send-off

Couple that with the fact that the producers of the show were concerned about how the culmination of the Sam and Diane romance would play out.  Television audiences are notorious for losing interest in a show after the two main characters tie the knot.  Apparently, the ongoing fun of married life isn’t quite as entertaining as watching the highs and lows of a courtship in the making.  The producers also felt that the bar was always meant to be Sam’s one true love and, over the course of those first five seasons, Sam’s relationship with the bar had taken a bit of a back seat.  So, when Shelley told the producers that she wouldn’t be returning for the show’s sixth season they put together an elaborate send-off for her character where she and Sam would put their relationship on hold so that she could focus on her writing.

It’s a great episode because it allowed Shelley to return as Diane later on in episodes of both Cheers and Frasier.  Still, no commitment to her return was made.  And that’s just the way that Shelley wanted it…as she has said numerous times that she walked away with no regrets.

Replacing Shelley’s Diane Chambers was Kirstie Alley as Rebecca Howe. Listening to a couple of interviews with the producers of the show, Kirstie was selected as Shelley’s replacement almost immediately, and while some fans argue that the show was never the same, it did run for another six seasons.  Personally, I thought Rebecca Howe was a fun addition to the bar, but I did miss the quick-witted, always fun banter between Sam and Diane.

Of course, Shelley went on to star in a ton of movies.  When she had told producers that she wouldn’t be returning, she had already signed a deal with Disney and because of that, while it was still a gutsy move to leave Cheers, it is more understandable knowing that this talented lady had work lined up for the foreseeable future.

Looking back on it all

For me, I have to admit that, post Cheers, I love Shelley most in those two zany Brady Bunch movies.  She does a great job of channeling the best of ‘Carol Brady.’  Along with actor Gary Cole, these two folks did a wonderful job of both poking fun, and respectfully paying homage to Florence Henderson and Robert Reed.  Shelley was also terrific in more recent appearances on ABC’s Modern Family.  She played Jay’s wacky ex-wife ‘DeDe,’ but unfortunately the creative team behind that show decided to kill off her character.  Now with all that said, let’s talk about that very last episode of Cheers for a moment.

How many of you were in the same camp as me and really wanted Sam and Diane to end up together?  I understand the fact that they didn’t stay true with the producers’ desire that Sam’s true love be the bar, but that series finale did not play out the way that I wanted it to.

A life-long bond between Long and Danson

The Beef Doesn’t Hold Up

Knowing the tensions on the set of Cheers, it is truly heartwarming to watch this interview with Danson and Long from a few years back where Ted exercises that same level of graciousness that Shelley demonstrated decades ago when she accepted her Emmy Award.

Despite the conflict and the fact that Shelley wasn’t around for most of those final six seasons, it is clear that Ted has a tremendous amount of respect for Shelley and her work on the show that made both of them stars.

So, were you like us, and did you want to see Sam and Diane together when the show finally ended?  Or, did you think it ended perfectly? Let us know in the comments section, and watch our good friend, Dave Sundstrom’s full video below, enjoy!