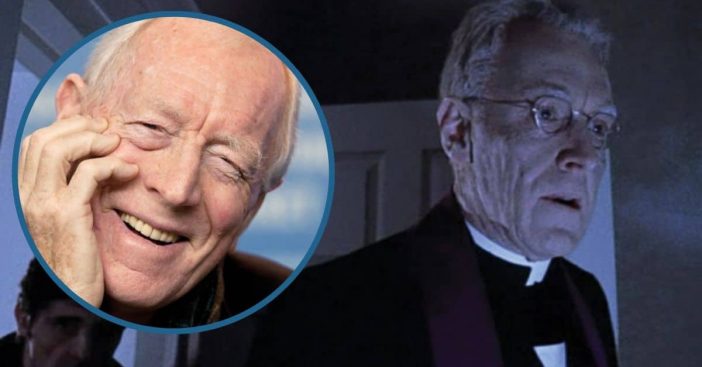 It has been reported that Max von Sydow has sadly died at the age of 90. He starred in Ingmar Bergman’s The Seventh Seal and also played the role of Father Merrin in William Friedkin’s The Exorcist (1973). He died at his home this past weekend n Provence, France. His widow, Catherine von Sydow, confirmed the news of his death to the media.

“It’s with a broken heart and with infinite sadness that we have the extreme pain of announcing the departure of Max Von Sydow on March 8, 2020,” she says.

Sydow would win a best actor Oscar nomination for his role in Pelle the Conqueror (1987). This was a pretty big deal considering the film was non-English. Just two decades later, Sydow would be nominated again while working with another young actor in the Stephen Daldry 9/11 drama Extremely Loud & Incredibly Close (2011). As a result, he was the only male Swedish actor to be nominated for an Academy Award.

Sydow would make his debut in American movies with the George Stevens epic The Greatest Story Ever Told (1965). He actually once said that working on that film was like “being in a prison.” He says, “It was the hardest part I’ve ever had to play in my life,” he said, and that wasn’t because it was his first English-language role. “I couldn’t smoke or drink in public. The most difficult part of playing Christ was that I had to keep up the image around the clock. As soon as the picture finished, I returned home to Sweden and tried to find my old self. It took six months to get back to normal.”

Other incredible movies and roles

More recently, Sydow would take on the role of Lor San Tekka in Star Wars: The Force Awakens (2015). He also can be seen on HBO’s Game of Thrones for which he earned an Emmy nomination. Sydow truly is an incredible talent that we will surely miss. Rest in peace.