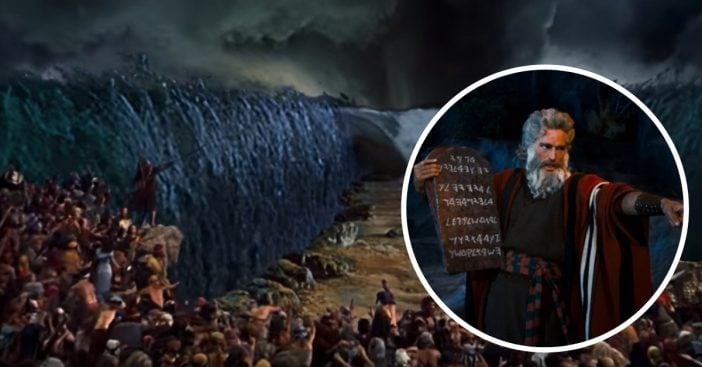 Families watched this movie every single Easter! They would find Cecil B. DeMille’s 1956 The Ten Commandments airing on television screens until they finally bought the VHS. Between television airings, or however they access the film now,  watching the movie each year before Easter became and remains a tradition in households all over America. The movie tells the story of Moses and how he learns of his true Hebrew heritage and his divine mission of being a deliverer of his people.

1. Yul Brenner (Rameses II) bulked up for his role

Once Yul Brenner learned that he would be playing the role shirtless for the better part of the film (and also playing the role opposite Charlton Heston as Moses) he began a very rigorous weight training program to bulk up. He didn’t want to be physically overshadowed by or compared to Heston!

2. No one received on-screen credit for the voice of God

There’s a bit of confusion when it comes to who actually voiced God in the film. Wikipedia officially credits Charlton Heston (Moses) as the voice of God at the burning bush, although he was uncredited. DeMille’s publicist and biographer, Donald Hayne, confirmed this but said that he [Hayne] provided the voice of God giving the Ten Commandments to Moses.

3. The Red Sea was actually Jello

The scene of the parting of the Red Sea — so incredibly stunning to audiences at the time — was achieved by using large dunk tanks flooded with Jello. The film was then shown in reverse to achieve the illusion of the sea being ‘parted’. Gelatin was added to the tanks to give the water a sea-like consistency!

Charlton Heston, who played the role of the adult Moses, actually had a son who played the infant Moses shown at the beginning of the film! His newborn son Fraser was about three months old at the time and DeMille purposely planned out the timing of the scene so Fraser would be taken out of the basket at the same age that the real-life baby Moses was!

Director DeMille picked Charlton Heston for the role because he resembled Michelangelo’s statue of Moses in Rome, Italy.

Be sure to SHARE this article if you thought any of these facts were interesting!

RELATED: Charlton Heston and 10 Other Celebrities Who Served Our Country In World War II

Check out the video below of the iconic parting of the Red Sea scene from the 1956 film The Ten Commandments:

If you have more time, here’s the entire film for your enjoyment!