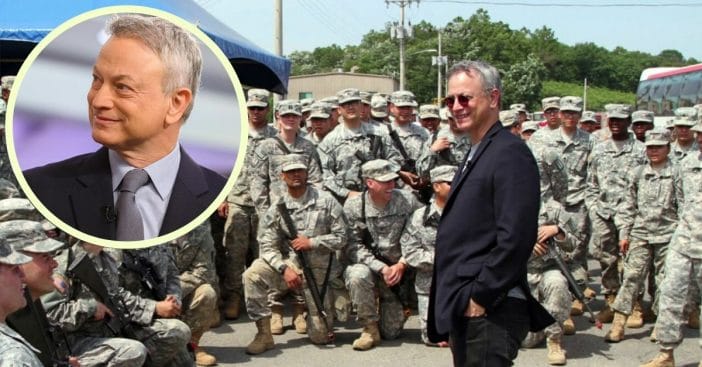 This month, Gary Sinise received a very special award honoring his commitment to helping veterans. Sinise entered the public gaze as Lt. Dan Taylor in Forrest Gump. After, he continued putting a spotlight on topics relevant to servicemen. This time, though, he did it by raising money, resources, and awareness.

This year marks over 25 years since Sinise acted alongside Tom Hanks in the famous movie. While that film as a whole stuck with many people, Sinise’s experiences stayed with him long after filming ended. His feelings manifested in dedicated fundraising and support for veterans groups. Recently, all his hard work earned him Patriot Award. This itself is the highest medal of honor by the Congressional Medal of Honor Society.

Gary Sinise felt a connection with veterans all this time

According to Yahoo, Gary Sinise has dedicated his time to serving veterans and their families. This connection began in 1994. To this day, viewers consider Sinise’s portrayal of Lt. Dan as one of the most realistic in cinematic history. Not only did Sinise have the job of portraying an admirable serviceman and friend for Forrest, but he also had to explore the torment veterans endure after what they’ve seen and experienced. Lt. Dan offered a mutual connection between Sinise and wounded veterans Sinise had not anticipated.

Less than a month after the movie’s release, Gary Sinise found himself invited to a Disabled American Veterans national convention in Chicago. “I realized early on that [Lt. Dan] was kind of an ice breaker,” Sinise said to The Arizona Republic. But he did not realize the extent of the role’s impact at first. “I could not have foreseen that the Lt. Dan character would be a character that has a life of its own beyond the movie. “It’s been a blessing and a benefit to be able to have this association with [the] wounded in our military community.”

This award recognizes his lifelong passion

Throughout his life, Sinise grew up members of his family in the military. His father served in the Korean War as a member of the Navy. His uncle was stationed in Japan and his brother-in-law was a medic. When he received a uniform as a gift from his uncle, he wore it as much as possible. Later in life, he changed tactics and showed support by founding the Gary Sinise Foundation in 2011. The foundation provides meals and specialized equipment to veterans. It also provides specialized smart homes, the latest in tools adapted for injured veterans.

When Sinise puts his bass guitar skills to use with the Lt. Dan Band, he performs for active-duty troops and veterans alike. Sinise balances hands-on activism with important vocal support. Both, he feels, are crucial for these important members of society. Injured veterans require different tools when they return home and may need help working through PTSD. And, just as importantly, they need to feel confident that people will have their backs. “I’ve met a lot of […] veterans over the years,” Sinise stated. “I just want them to know that they are appreciated, and not forgotten.”

Click for next Article
Previous article: Petco Donates $250,000 To Veterinarian School To Help Save Lives
Next Post: Liza Minnelli Has Some Thoughts About Renée Zellweger Portraying Her Late Mom In Biopic ‘Judy’