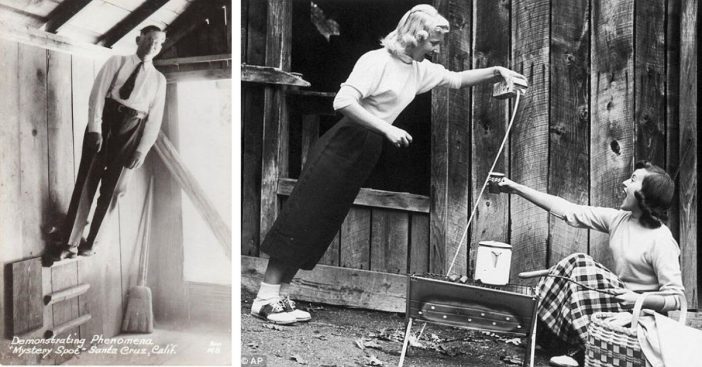 Half a block off of Highway 12, south of Wisconsin’s Delton Lake, there sits a Spot. This is the Wonder Spot. From 1949 to 2006, this location served as a major tourist attraction by being unlike anything anyone had ever seen before. Going there became akin to joining Alice in Wonderland.

Like many magic tricks, the strange anomalies at the Wonder Spot came about thanks to optical illusions. But the bizarre nature of this odd place captivated visitors for decades. The Wonder Spot endured for years and drew in tens of thousands of pilgrims. Ultimately, the advent of theme parks stifled business, but even still the location captures the imagination without fail.

The Wonder Spot sat on a location perfect for invoking wonder

When developing an otherworldly, gravity-defying attraction, location means everything. Louis Dauterman, a native of Fond du Lac, Wisconsin fully opened the Wonder Spot in 1952. Eventually, Bill Carney purchased the tourist attraction in 1988. According to Carney, as many as 50,000 visitors flocked to the Wonder Spot each year throughout the ’90s. Only the development of more sophisticated amusement parks rattled the location’s success.

The Wonder Spot sat at the bottom of a ravine, in which was nestled a cabin. Though actually optical illusions, tour guides attributed the weird happenings to the effects to igneous rock formations. These peculiar events occurred inside and out of the cabin. Advertisements took full advantage of this place’s bizarre layout. The brochures consistently promoted it as a place “where the laws of natural gravity seem to be repealed.”

All it takes is some clever manipulation

Our eyes and brains process information in complex ways. When an image – in the form of light – passes through our eye, it gets processed so our brain can tell us what we’re seeing. Throw in some confusing optical illusions, and things get especially difficult. The Wonder Spot uses this trick to its fullest advantage. Slants, angles, and geography combine to make the Wonder Spot the gravity-defying location we love.

When first visiting the ravine and its odd little cabin, it looks as though water flows backward outside. Additionally, visitors saw chairs apparently balancing on only two legs while they themselves couldn’t stand straight.

Changing things up is all it takes

When new amusement parks hurt business, Carney sold the location to the village of Lake Delton in 2006 for $300,000. Initially, the village then planned to construct a road by the famous ravine. By the time it closed, the Wonder Spot became the oldest permitted attraction in the Wisconsin Dells region. The Wisconsin Historical Society currently houses items from the cabin, including a chair and can for pouring water.

Many other houses of illusion cropped up since the Wonder Spot closed. All implement the same tricks to fool the eye, no matter how humble or grand the place is. The cabin itself sat perpendicular to a hillside to help make everything look so lopsided and gravity-defying. Though it officially closed, its legacy remains.

Click for next Article
Previous article: 6-Year-Old Boy Gets Standing Ovation From Classmates After Beating Cancer
Next Post: Three U.S. Firefighters Have Been Killed In Plane Crash While Battling Australian Bushfires