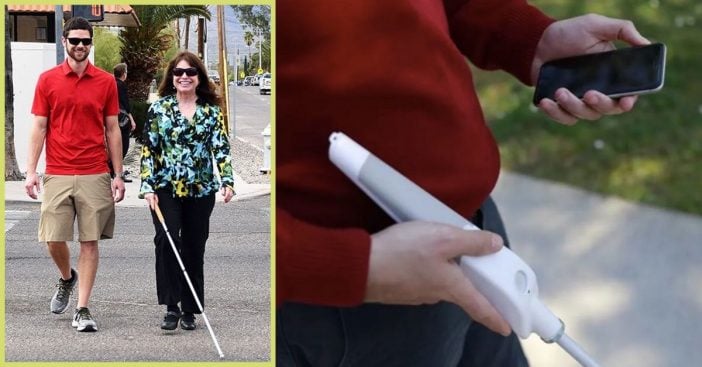 The World Health Organization reports that there are about 250 million visually impaired people in the world. About 20% of those people use a white cane to navigate the world around them easier. A white cane is the most common item used to help the blind get around, but they still are unprotected from the chest up.

With this being said, smartphone technology has played a large role in helping the blind navigate the world easier. But, it’s hard to carry both a cane and their smartphone at the same time. That’s when Kursat Ceylan, a blind Turkish inventor, partners up with a team of engineers from Young Guru Academy to produce a “smart cane.”

The smart cane goes by the name of WeWALK. The cane has an ultrasonic sensor that detects obstacles above chest-level. It warns the person with a vibrating handle so those visually impaired people have greater confidence when navigating the outside world. WeWALK also connects to Google Maps to inform users about businesses around them they may not have known about before.

The smart cane also allows users to operate their Bluetooth-enabled smartphones through a touchpad in the handle. This leaves one hand free, and a lot easier than holding both a cane and a smartphone.

Ceylan speaks to CNN on this new invention. “As a blind person, when I am at the Metro station I don’t know which is my exit … I don’t know which bus is approaching … [or] which stores are around me. That kind of information can be provided with the WeWalk,” they say.

The smart cane technology will even allow users to soon connect with Uber, Lyft, and Amazon Alexa.

A report shows that those who are blind suffer from severe loneliness in comparison to those who can see normally. Thankfully, smart technology like this highly-developed smart cane can help in coercing visually impaired to become more socially active!

“In these days we are talking about flying cars,” Ceylan tells CNN. “But [blind] people have been using just a plain stick.” The WeWALK will soon be available for $500. Check out the promotional video for the item below.

Take a look at which inventors actually regret their most important or popular inventions.