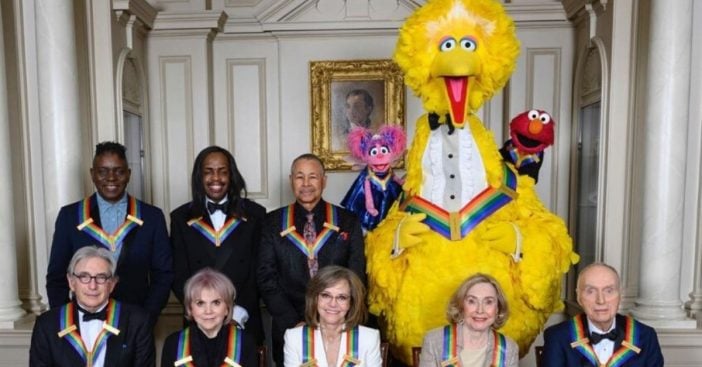 This year, the group Earth, Wind & Fire, Linda Ronstadt, Sally Field, composer Michael Tilson Thomas, and Sesame Street were honored at the Kennedy Center Honors. According to Wikipedia, “The Kennedy Center Honors is an annual honor given to those in the performing arts for their lifetime of contributions to American culture.”

This year, it was very special as Earth, Wind & Fire became the first African-American group to be inducted. They hope they are the first of many to come. The band’s original members Philip Bailey, Ralph Johnson, and Verdine White were in attendance. However, the founder Maurice White passed away in 2016. The group spoke of Maurice at the ceremony.

Ralph Johnson said, “You can’t play any Earth Wind & Fire songs without Maurice’s DNA being on it, so he’s always here and we’re always celebrating him and his vision. People are still coming together and having fun.”

Artists performed the band’s greatest hits, including “After the Love is Gone” and “September.” David Foster, Cynthia Erivo, John Legend, the Jonas Brothers and Ne-Yo performed different hits. All artists came together to perform “September.”

Flor de Toloache said, “She’s a huge inspiration and influence to each of us as musicians and as women in a male-dominated industry in our genre. She went forth and did everything her heart desired, and she set the example for us to do the same. We’re happy to be representing her Mexican side.”

In addition, Steven Spielberg, Tom Hanks, and Pierce Brosnan came out to honor Sally Field. Lastly, the show honored composer Michael Tilson Thomas and Sesame Street. Many humans and puppets wore a single yellow feather in honor of Caroll Spinney, a puppeteer on Sesame Street who recently passed away.

“He was really important to all of us and a mentor to all of us, and we’re all still kind of reeling,” Elmo puppeteer Ryan Dillon told Billboard. “I think the world has lost a true American icon. But we’ve all got a little bit of Bird with us tonight.”

In conclusion, watch the performance of “September” below: