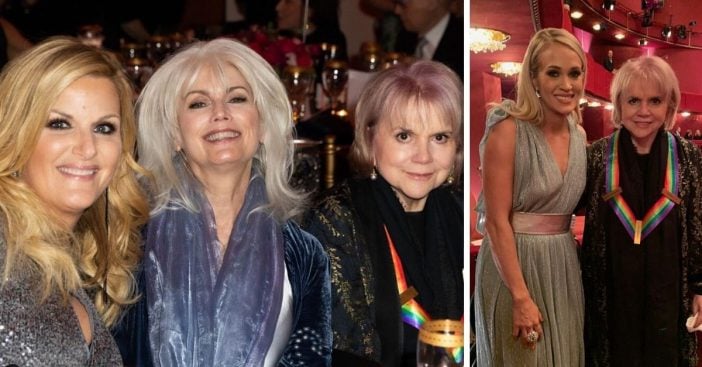 During the 2019 Kennedy Center Honors, there was a special tribute to country and rock music icon Linda Ronstadt. Trisha Yearwood came on the stage to perform and honor Linda with two of her top hits. She performed “You’re No Good” and “I Don’t Know Much.” Aaron Neville joined Trisha for the second song, which he originally sang with Linda. The pair won a Grammy for the song in 1990.

Before their performance, Emmylou Harris gave a speech about Linda, her longtime friend. She said, “It was February of 1973—Linda, opening for Neil Young, had just wowed his crowd of thousands in Houston, Texas, and then made her way across the tracks to Liberty Hall, a hippie honky-tonk where I was doing two shows a night as part of a band called the Fallen Angels.”

Emmylou continued, “There we would meet for the first time and begin a friendship and a collaboration lasting almost five decades. It has been one of the great joys of my life to sing with Linda, but even more to have her fierce, unfaltering friendship. And it is a joy to stand before her now, before all of you, before the world, and say, ‘Linda, my sister, my dear companion, thank you, and congratulations on your Kennedy Center Honor.'”

Country singer Carrie Underwood also performed during the tribute to Linda. She sang “Blue Bayou” and “When Will I Be Loved.” Before the ceremony, Carrie talked about what she loved about Linda and why she is a true icon. Carrie said, “One of the things I always admired about her is her ability to do whatever she wants. She always broke the rules and sang music that she felt like was true to her.”

Congrats to Linda on this incredible honor! In conclusion, watch the performance of “I Don’t Know Much” by Aaron Neville and Trisha Yearwood: