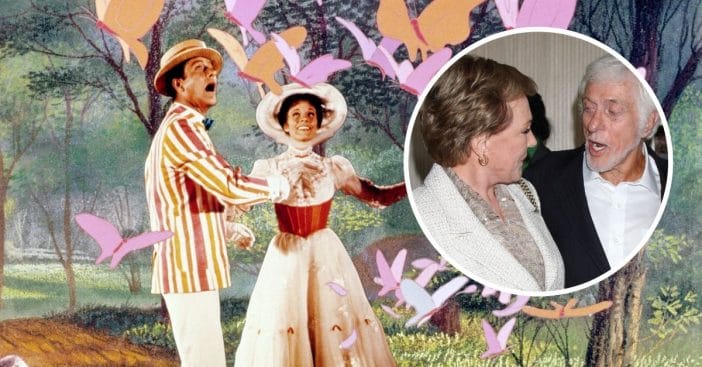 Dick Van Dyke was recently honored at the 43rd annual Kennedy Center Honors. Many special guests came to honor Dick and celebrate his career and accomplishments. In addition, Debbie Allen, Joan Baez, Garth Brooks, and Midori were also honored. Dick’s Mary Poppins co-star, Julie Andrews was there to share a very emotional tribute to her friend.

Julie was honored back in 2001, so she wore her rainbow ribbon to the ceremony. Julie introduced Dick by saying, “I think Dick is as magical as [Mary Poppins] is. Like his character, Bert, in that movie, Dick seems to have found the secret to happiness. And, like Bert, Dick is many things. He’s an artist, a one-man band, a profound philosopher, a high-stepping showman and spreader of charm. And there’s a secret — good luck does rub off when he shakes hands with you.”

She added that he is “endlessly kind, wildly imaginative, insanely talented and hilariously funny.” She finished her speech by saying, “Every day is ‘Supercalifragilisticexpialidocious’ with you, Dick.” Julie wasn’t the only one to honor Dick during the show. Pentatonix and Aaron Tveit shared a fun rendition of “Chitty Chitty Bang Bang” while dancers Derek Hough and Laura Osnes did a dance routine to “Step in Time.”

It was a wonderful night to celebrate the 95-year-old among other honorees! What is your favorite movie that Dick Van Dyke has starred in? Watch the “Step in Time” tribute below: