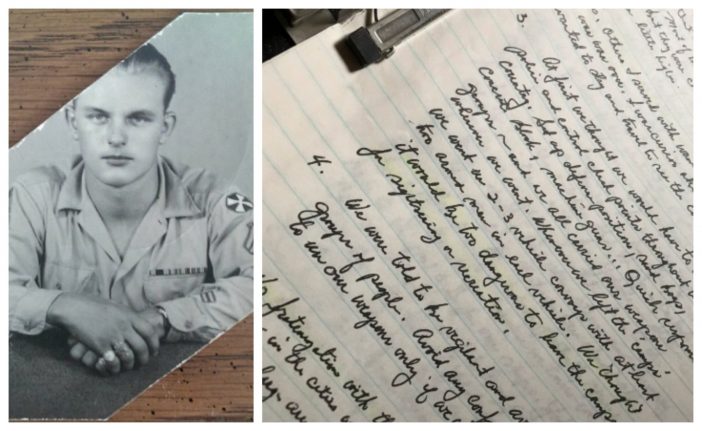 A Twitter user by the name of Michael Bosack recently shared a letter from his grandfather about his experience during the end of World War II. The letter was beautifully handwritten and depicted the Allied-occupation of Japan, which became known as VJ Day. VJ Day was the day of the official announcement of Japan’s surrender, and was made official on August 15th, 1945.

Bosack shared a thread of old excerpts, photos, and facts about his grandfather at that time period. Bosack included his own typed rendition of the original letter, so those interested would be able to understand the contents of the letter. Bosack’s grandfather was still alive at the time and the thread of letters were between his grandfather and himself when he was younger.

(Thread) Every year around August 15th I dust off one of my most prized possessions: an old letter my grandfather wrote me answering my questions about his experiences in the postwar occupation of Japan.

Bosack shared some incredible and historical facts about his grandfather. They included forging his birth certificate and enlisting in the army at 16 years old, landed on D-Day, and was among the first to arrive for the occupation. He was present for the occupation until he left for the Korean War, but came back for the rest of the occupation. He also ‘met’ his Japanese wife who was a switchboard operator. He loved her voice so much that he tracked her down.

(2/9) Some background on my grandpa first:
・Forged his birth certificate & enlisted at 16
・Spent his 1st year of service as an Army boxer (story for another day)
・Landed on D-Day
・Sent to PI for mop-up fighting before V-J day
・Among the 1st to arrive for the occupation pic.twitter.com/uYn2nJjfws

I asked him about his first impressions upon landing in Japan, and among other things, he described the devastation caused by allied bombing campaigns: pic.twitter.com/vz9ZgIPcRF

The letter answered Bosack’s initial questions about the landing in Japan. His grandfather described the devastation that was caused by the allied bombings.

(5/9) One question I asked was about the toughest thing he had to do during the occupation.

His answer made me think about this same type of activity in Iraq/Afghanistan and how different things turned out there.

Also, we Americans today need to reflect on his last sentence… pic.twitter.com/xwHqtEsL9X

Next, Bosack asked his grandfather what the toughest thing he had to do was, and this caused him (and others) to compare the time period to that of Iraq/Afghanistan today. Part of the answer was, “We had to rudely enter their homes with our combat boots on waving our weapons and scaring the heck out of people.”

(6/9) Then I asked him about the easiest aspect of the occupation: pic.twitter.com/hWy8coujHE

Then Bosack asked his grandfather about the easiest part. The answer? That the Japanese cooperated with the occupation forces in every way. It was wild to him that these people who had suffered so much at the American’s expense were cooperating with them.

(7/9) I also asked him about Japanese reactions to the Allied occupation: pic.twitter.com/zFwyt7Z1Ia

The grandson also asked him about the Japanese reactions to the Allied occupation. He responded that he believes the Japanese were surprised, especially the Japanese troops. He stated that they were only left to wear remnants of their uniforms because there wasn’t enough clothing to be found. He did say, however, that the reactions changed to a positive light due to the social changes and economic growth.

(8/9) When I asked him about the best policy decision made for the occupation, here was his answer:

When asked about the best policy decision for the occupation, he responded with allowing the emperor to keep his throne. He was the one who went live and told his people to cooperate with the Americans after all the suffering they had been put through.

(9/9) I’ll end with my favorite part of the letter: one of his anecdotes.

He had experience as a tanker, so among his first jobs during the occupation was driving heavy machinery from the port to different bases in the area. Here’s what happened one day: pic.twitter.com/WKtFtL4iA3

Then to wrap things up, he enlightens his grandson with a story. To sum up the story, he was given rice by a common man, which was scarce at that point in time. He sought out a Japanese interpreter who explained what the gift meant, and the two shared the rice together.