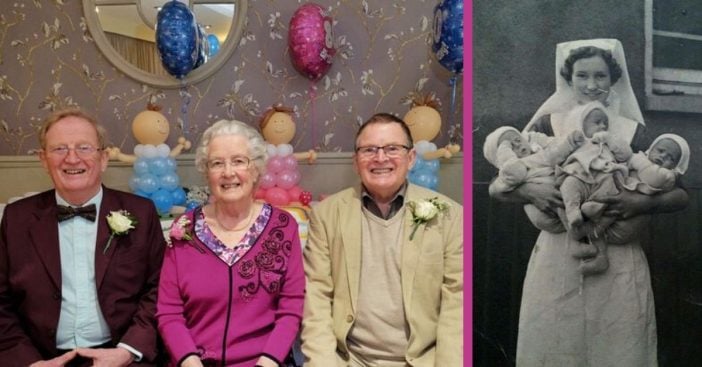 The birth of a new baby is often heralded with much revelry. Add in the remarkable occurrence of having twins, and it is even more shocking. But even more surprising is the birth of triplets, especially 80 years ago, when the Hill triplets were born. Parents, doctors and Bristol as a whole were shocked by this rare occurrence. But with that awe came joy. Doctors in the area felt very proud of delivering triplets, and the Hill parents made quick work of bringing laughter to their new situation. The triplets of Bristol earned a lot of attention.

That joy has remarkably been maintained all these years. Through 80 shared birthdays, Gillian, Roger and John cherished the familial bond they shared with all members of their family, including each other. A strong contributing factor to this closeness is levity. And that was in no short supply at the Hill household. There also was no shortage of siblings either. Though having the Bristol triplets is remarkable enough, parents Hilda and Jack Hill had also had nine children before them. This made for quite the situation.

Time and space put a strain on the Hill family

Living in such a crowded house brought a few setbacks. The family shared one bathroom, from which they took turns using the bathtub. Even before the last family member got in, the tub was less full and less warm. Overcrowding meant roughly three siblings occupied one bedroom. Other conditions were far from ideal. Eighty years ago, there were no scans to give parents an idea of what to expect. The household had not been prepared for three new additions at one time. On April 9, 1939, the Hills received quite the shock. And all births occurred within eight minutes of each other.

RELATED: Woman Who Thought She Had Kidney Stones Unexpectedly Gives Birth To Triplets

The years surrounding their birth came with additional fears. Hanging over the family, and all families in the area, was the Bristol Blitz. Bombs crashed down on key locations across Bristol as the Nazi German Luftwaffe in an aerial campaign against Britain. Though the Bristol Harbour and the Bristol Aeroplane Company were the main targets, civilians fell into the line of fire as well; men, women, and children felt its effects. “A row of terraced houses at the top of our street was wiped out by a bomb one day,” Roger recalled. The war coupled with the Hill family’s living arrangements meant food was in short supply, and plenty of nights were spent cold and hungry. So devastating were these raids that decades later they are still met with mourning.

In times of uncertainty, the Bristol triplets and their family made the best of what they had

Even with hunger panging in their stomachs and bombs rumbling overhead, the Hill family sought out the positives. This came most easily for the younger generation of Hills. While the adults put on a brave face, the children reveled in the strange, new routines around them, Roger remembers. He remembers how they simply “were children. We didn’t realize the gravity of it. We thought it was great fun going out and picking up the shrapnel in the mornings.”

Leading by example was their parents. Though perilous, when the local council wanted them to be moved to a safer area, Mr. Hill dug his feet in. Roger, most vocal of the trio, tells how his father “would have nothing to do with it and said he would keep us safe together at home.” In 1946, the Bristol triplets moved with their family to a new home in Bishop Road, Bishopston. There, they received some respite; the house was larger, and the presence of a proper bathroom made them feel very important indeed.

Everyone worked as a team in this large family

Tragedy befell the Hills when father Jack Hill passed away due to kidney failure. The family grieved and needed to work hard to supplement the household income, including the older siblings. For Gillian, though, their new living situation granted her some freedom her other female peers did not have. In particular, she vividly remembers, “I got away with murder. Not having a father, I went out in makeup when other girls were being made to take theirs off.” Even with these changes, nothing tarnished the bond between her and her siblings. “Gillian had full freedom. Wherever us boys went, she went with us,” John acknowledges.

This led to some of the ways the siblings, particularly the triplets, stayed close: through teasing. They maintain this habit decades later, such as when John claims, “Roger’s real name is Tuesday. He was so damn ugly our father took one look at him, turned to our mother and said, ‘You had better call it a day.’” John’s fondness for jokes goes back to when he pranked his sister at a dance. “When the music started Gillian and I got on the dancefloor. I span her around and she went flying off the dancefloor on her backside to great cheers from the crowd.” As adults, they pursued different careers in different parts of the country. Gillian worked for an aerospace company while Roger and John went into marketing and insurance respectively. But years of sharing a cramped space, the troubles of war, and even a birthday haven’t kept them from meeting up to celebrate eighty years still going strong.