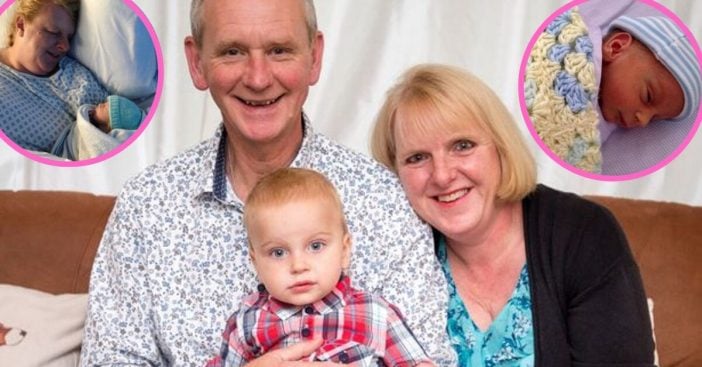 For sixteen years Louise Warenford desperately wanted to have a child. She and her husband were ready and willing to be parents. The couple wished to have a baby they could raise and love unconditionally from day one. Over a decade and a half passed with no such luck. Those years were filled with complications and heartache. As a result, it seemed futile to hope. The cycle had gone on for too long, and their hearts had been broken too many times.

But the heart certainly pursues what the mind says to abandon. And though hope diminished, it did not fade, because it resided safely in the heart that knows to push on no matter the odds. The mind will analyze and dismiss. The heart stubbornly persists. And it was fortunate for Louise Warenford and her husband that they decided to pursue their dreams one final time, pouring every resource and ounce of energy into this last attempt. The “amazing” result changed their lives and started a new one.

Louise and husband Mark finally gave birth to a baby boy who they named William. They have all come a long way since 2010 when the couple thought they would have to give up trying for a baby. She was 47 when she finally became pregnant with William. Even then, Louise admits “I couldn’t enjoy my pregnancy, because I was constantly scared that I was going to lose him.”

But against all of Louise’s expectations, William was born on a summer day 37 weeks later through a c-section. The doctors advised the procedure because they believed something would go wrong otherwise. Dr. Hassan Shehata, from the Center for Reproductive Immunology and Pregnancy, calls Louise Warenford “a brave young lady” and “both her and her partner deserve a chance to be parents.” Louise feels complete with baby William in their lives, though now at age 49 she realizes she is “not the spring chicken that I used to be and it does take me a while to chase him around the floor.”

“It was all worth it” to Louise Warenford

Eighteen years of trying to start a family had brought on eighteen miscarriages before William’s birth. Louise Warenford suffers from a condition where killer cells attack unborn embryos. The couple tried in vitro fertilization, a procedure to help with fertility. They spent about £80,000 on such treatments in the hopes of becoming pregnant. The couple traveled from their native Swindon to the Czech Republic. There, Warenford underwent embryo donation.

Some signs became apparent to Louise Warenford during her years-long ordeal. She recalls, “Every single time I ended up losing the baby around the 14-week scan mark.” Each time, she “couldn’t stop crying every time I miscarried. Each time they couldn’t find a heartbeat.” By 2010, she had hit an emotional rock bottom. Years later, she brought herself to give it one final try. After decades of wanting and aching, William entered her life. Looking back at every tear shed, “looking at William now, it was all worth it.”