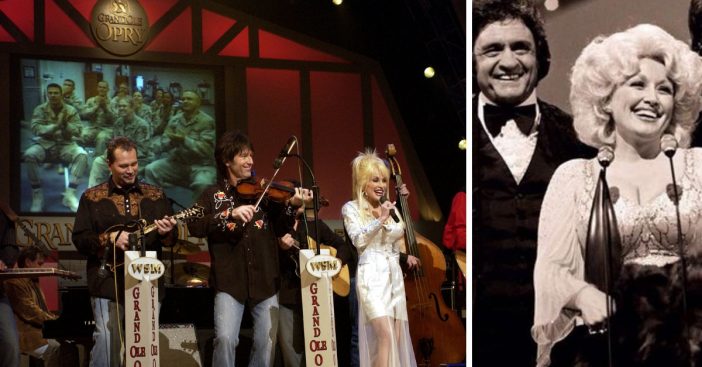 Dolly Parton is set to headline two sold-out shows at the Grand Ole Opry to celebrate 50 years as a member there. As she gears up for the shows, she remembers some incredible memories of performing at the Tennessee staple. She made her debut at the Grand Ole Opry when she was only 13 years old.

Jimmy C. Newman actually gave up one of his weekly spots so that Dolly could perform for the first time. In addition, she sang with her uncle Billy Owens and received three encores. On top of that, she was introduced by Johnny Cash himself.

According to USA Today, Dolly recalls, “One of my favorite memories is when I was in the audience and I saw Johnny Cash on stage. He was young and on drugs, but he had this great charisma and sex appeal, and that was the first time I ever got stirred by a grown person … in a way that I didn’t understand. I was just a young girl. It affected me and the way he moved and all that.”

She goes on to say that he was her first real crush on a grown man. Dolly started to have all of those feelings as a young girl for Johnny Cash. She had kissed a boy before, but she never understood sex appeal before she saw him on stage. Years later, she actually told Johnny and June about that. They all laughed about it.

She said that the dressing rooms back in the day were very small. They would cram 10-12 ladies in a dressing room barely big enough for a few people. She remembers everyone gossiping and fighting for the mirror.

“I remember standing in the wings watching all these incredible artists, people with big names, the biggest people. You know, from Hank Snow, Webb Pierce, you see I go back. All the way back. I remember seeing Patsy Cline. I was young, and it was after she had had a car wreck and she’d gotten scarred up. And I remember as a child thinking there was this really big deep scar between her eyebrows.”

She continues, “I remember seeing her before she had that, and I remember thinking about how awful that was that she got her pretty face scarred up like that. It didn’t hurt her singing any. But I just felt sorry and sad just thinking about her nearly getting killed in a wreck and how she wound up dying anyway. I just remember looking at her and seeing that and then her walking to the microphone and her starting to sing and then nothing else registered beside her God-given voice.”

4. Lastly, she has fond memories of Porter Wagoner

In conclusion, she shared, “I have fond memories of working with Porter and the Wagonmasters. That was very, very special, too. I wouldn’t have been a member of the Opry that early if it hadn’t been for Porter and being part of the show and him pulling strings. It was special times.”

Click for next Article
Previous article: These Stores Will NOT Open On Thanksgiving Day
Next Post: Woman Celebrates 107th Birthday And Says Secret To Long Life Is Drinking Coca-Cola Every Day