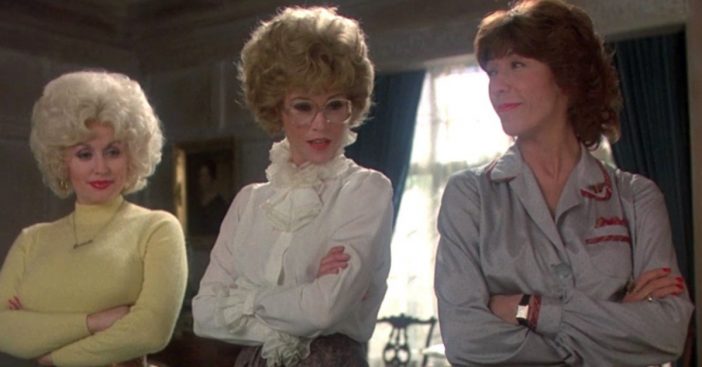 We previously reported that a 9 to 5 sequel was in the works starring the original cast of Dolly Parton, Jane Fonda, and Lily Tomlin. Dolly Parton has revealed that the sequel is progressing and a lot of work has already been done to bring the sequel to audiences. They are currently on the second rewrite of the film and making sure the characters are just right.

The original 9 to 5 movie was a huge success, leading to a television series and a musical. In the original movie, the women played secretaries who work together to take down their awful boss and create a better workplace for everyone.

The sequel is set to focus on a new generation of women in the same company. Unfortunately, the same problems are happening and they reach out to the original three women for help. Dolly has revealed that there are so many ideas that it has taken a while to get the script just right and all of the original ladies want to make sure the characters are written perfectly.

She almost said no to the sequel

Dolly has also admitted that she originally wasn’t up for a sequel of the popular film. According to Entertainment Weekly, she said, “I was never willing to do a sequel because they never came up with anything that was as good as the original. I don’t like to mess with history, you know? But this would be addressing the same issues, and they need to be addressed again and some more, in different ways.”

After Dolly agreed to work on the sequel, Jane and Lily also joined. They agreed that there are a lot of problems in workplaces today and these issues need to be dealt with. The actresses say that many people connected with the film because it was not only funny, but it dealt with real issues that many people face at work. It can help shed light on things that need to be addressed and changed.

So far, the release date and the actresses that will play the younger generation have not been announced. We can’t wait to learn more and find out who will play the young women who get an amazing opportunity to work with Dolly, Jane, and Lily! Are you excited for the 9 to 5 sequel?

Please SHARE with your friends and family who would love to see a 9 to 5 sequel!

Check out this clip from the original 9 to 5 movie:

Previous article: Tom Hanks In Talks To Play Elvis Presley’s Manager In New Biopic
Next Post: Joanna Gaines Reveals How She Feels After Having A Baby At 40