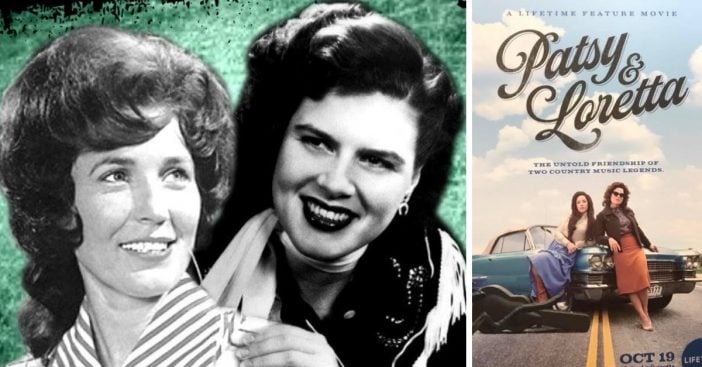 Did you know that country singers Patsy Cline and Loretta Lynn were best friends? They were best friends for years as they both tried to reach fame, until Patsy’s tragic death when she was only 30 years old. Now, Lifetime is coming out with a movie this fall that shares more about their iconic friendship.

The movie is called Patsy and Loretta and will be released on October 19, 2019, at 8 p.m. EST on Lifetime. Megan Hilty plays Patsy and Jessie Mueller plays Loretta. Kyle Schmid is set to play Patsy’s husband, Charlie Dick. Joe Tippett is set to play Loretta’s husband, Oliver “Doolittle” Lynn, for instance.

More info about ‘Patsy and Loretta’

The best part? Their real-life daughters will work as co-producers on the film. Their names are Patsy Lynn Russell (Loretta’s daughter) and Julie Fudge (Patsy’s daughter).

According to TV Line, this is what the film will cover: “When they first met, Patsy (Hilty) was already one of the biggest stars in country music while Loretta (Mueller) was just a coal miner’s daughter, starting off with little to her name but a $17 guitar. Instead of seeing Loretta as competition, Patsy took Loretta under her wings to help her make it in Nashville. Soon, they became close friends, touring together, bonding over their husband troubles and commiserating on being females in the male-dominated music business.”

This isn’t the first biopic to share more about their friendship. Coal Miner’s Daughter came out in 1980. While it was mainly about Loretta, it did show parts of her friendship with Patsy over the years.

The new film will cover Patsy and Loretta’s friendship as they tried to find fame in country music and as they got married and had kids. In addition, it covers Patsy’s tragic death in 1963, when she died in a crash when she was only 30 years old.

You can watch it on Lifetime on October 19, 2019, at 8 p.m. EST or watch it after on the Lifetime app or on Hulu. Will you be watching the film live?

In conclusion, check out the first trailer for the film below:

Loretta Lynn has lived in a haunted estate.

Read about her experiences if you dare.

Previous article: Dwayne ‘The Rock’ Johnson Just Married Lauren Hashian In Hawaii
Next Post: ‘NCIS’ Actor Mark Harmon’s Worth $90 Million At One Time He Was Named The Fifth highest-paid actor on Television