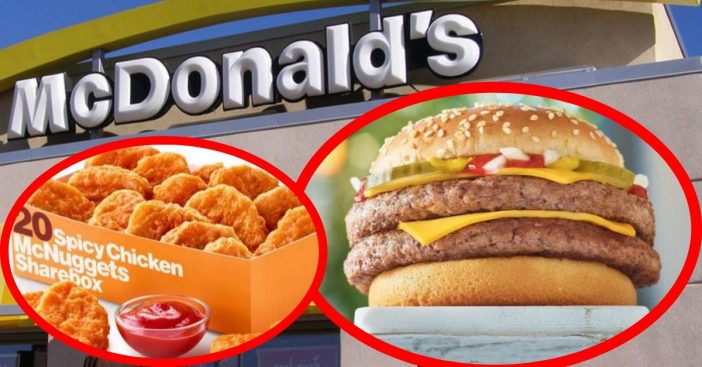 The worst kind of news. McDonald’s will reportedly be taking some classic items off the menu this week. Cue the sad music. The chain has welcomed the Spicy Chicken McNuggets to the menu, while also bringing back some favorites. These favorites include the Double Quarter Pounder with Cheese and the Twix and Mars McFlurry.

What menu items they’ll be removing

Talk about getting everybody’s hopes up. In addition to that, the Spicy Chicken McNuggets will also be leaving the menu. Say it isn’t so! We will also be saying goodbye to the Twix and Mars McFlurry and Mini McFlurry. According to reports, when one door closes, another one does open! We mean that new items will be coming to McDonald’s menus soon. How soon?!

Well, they’ve already announced the launch of the newest Galaxy Salted Caramel McFlurry. This delicious concoction is made from pieces of Galaxy chocolate and a swirl of salted caramel. This is then mixed into soft-serve ice cream. Yummy!

This new and exciting dessert item will be available in McDonald’s starting September 25th! So, at least we’ll be getting a new item to test out as some classic items are removed for good.

McDonald’s has really been aiming to move in a different direction, so it’s no shocker they’re removing certain items and replacing them with another. Just last year, the fast-food chain switched to fresh beef quarter-pound burgers in the U.S. and it has helped boost sales by about 30%! It has also helped improve the restaurant’s market share for the first time in five years.

Marion Gross, the company’s chief supply chain officer for North America, spoke to CNN Business about the change to the restaurant chain. “Our customers are changing at a super fast pace. As a result, we’ve had to change, too.” She says at that point, the change was “required” of them. She calls it the “biggest, boldest moves that we’ve made in a long time.”

Sounds like McDonald’s is not stopping there! We hope their new items succeed with their audience.

This Is Why Every McDonald’s Location Isn’t Open 24/7.