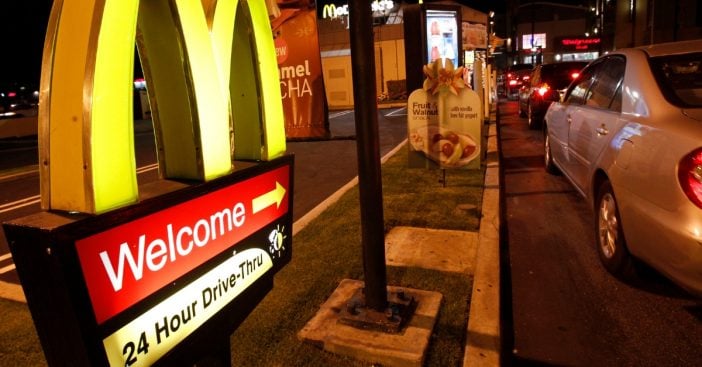 It’s no secret that late-night drives for comfort food at McDonald’s are some of the best memories one can have. Let’s face it: McDonald’s comfort food at 2 A.M. is the tastiest kind of comfort food. But everyone’s dreams have come crashing down at least once or twice when they realized that one McDonald’s location isn’t open at 2 am… but the one down the street is?

If you’ve noticed that some McDonald’s locations are open 24/7 while others aren’t, don’t worry, you aren’t going crazy. There is a reason for this though. While the 2003 push for McDonald’s franchises to extend their hours was intended to increase profit, for some locations they’re unable to do that, or it just doesn’t make sense to stay open that late with little sales made.

Some McDonald’s locations might need permission to stay open late by going to the town or city where it’s located. One location in Cambridge, MA had to do just that, where the store owner had to ask the town’s licensing commission to stay open 24 hours. Thankfully, the request was granted.

Secondly, some franchises remain busy all through the night with pretty steady sales and people coming in for late-night food. However, there are some store locations that are fairly quiet throughout the night with little profit made by the end of the evening into the early hours of the morning. In that case, it doesn’t make sense to have that be a 24-hour location.

A former McDonald’s employee released a statement on Quora detailing why customer traffic and sales are so important to keep a business up and running, especially a 24-hour business.

“Business hours depend largely on customer traffic…It’s the same reason some will open at 5 a.m. and others not until 6… I have worked a night that had exactly ZERO customers between midnight and 5 a.m., and many with fewer than ten.”

A trainer for McDonald’s also chimed in about the additional blows the location would face, should they stay open 24 hours with little reason to do so.

“There are some McDonald’s that are open 24 hours, however, some stores would not make much of a profit out of it, the amount of money made would not compensate the workers’ pay, the electricity, or resources lost. It’s a matter of profit and practicality,” they said.

This means that a local location in a mall will likely close down when the mall closes down for the day. Despite all of this, doing a quick Google search for the closest 24-hour McDonald’s will ensure that you get your late-night food!

Be sure to SHARE this article with your friends and family so you’re in the know about 24-hour McDonald’s locations!

Previous article: Tom Hanks Surprises Fan Inside Of In-N-Out, Then Pays For Everyone’s Meals
Next Post: If You Feel Congested, Get Out Your Slow Cooker Immediately