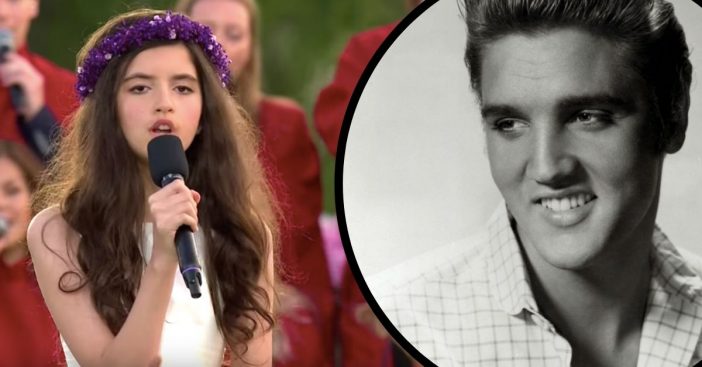 Have you ever heard an 11-year-old girl channel Elvis Presley so perfectly it’s almost haunting? One girl by the name of Angelina Jordan from Oslo, Norway is surprising audiences across the world with her soulful rendition of “It’s Now or Never.”

Angelina won first place when she was 8 years old during a televised run of a talent show in her home country. Since that point, she has been appearing on shows across the UK, the US, and many other locations. She also has millions of views on YouTube already because people are just so infatuated with her voice.

During her performance of “It’s Now or Never,” she wears a crown of purple flowers and a flowing, white dress. Fans are flooding the comments section of the YouTube video with praise for the young girl.

“Beautiful,… Elvis would be proud!” one person writes. Another person says, “This is the best version of the song that I have ever heard since Elvis, and by such a very beautiful young lady.”

One person chimes in with a lengthy compliment, praising Angelina for her talents and background in music. “Angelina is one of the few singers in the world who has truly boundless ability! We are so lucky to be witnessing the rise of this great, but youthful, star who every year is taking her performances to another exciting level! That she is just an 11-year-old girl makes it only that much more exciting!”

Angelina sure does have quite the background in music! She also took to Norway’s Got Talent when she was just 8 years old with a rendition of Cher’s 1966 single, “Bang Bang (My Baby Shot Me Down.)”

Check out a performance from Angelina when she was only 8!

Even back then, people were in awe of Angelina’s talent. The commenters on that video agree with the reactions of the judges; just pure awe!

“This girl is amazing — her voice is raw, natural. Puts ‘divas’ like Mariah and Christina Aguilera to shame. But I think she shouldn’t go into the business now or put out an album. She should grow up, have a normal childhood, and then return when she’s older enough. She’ll still have fans who will wait for her,” one fan says.

Watch the full video of Angelina Jordan performing “It’s Now or Never” below: