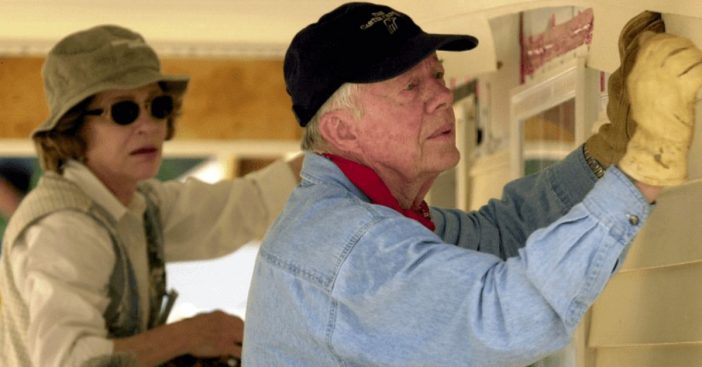 Jimmy Carter might be 94 years old and just had hip surgery last spring, but that has not stopped him from continuing his philanthropic efforts! The former President of the United States has been helping build houses for the poor for a total of 35 years with his wife, Rosalynn Carter. Together, they have built 4,300 homes in 14 countries since 1984.

The Carters seem to have no plans of stopping yet! They plan to continue their humanitarian work with Habitat for Humanity since Carter has recovered from his surgery.

The Carters love building houses for the poor and giving back

A spokesperson for the Carter Center reveals that the Carters plan to build 21 new homes in Nashville, TN in October of this year. “There have been many times when people have tried to count President Carter out, and they have never been right. We are excited that they will both be back,” Bryan Thomas, a spokesman for Habitat for Humanity International says.

Doctors advise Carter to heal up from surgery, but he’s back in action in less than a month

Carter recently underwent hip surgery after falling at his home and breaking his hip in May. He and his wife have been volunteering with Habitat for Humanity for over three decades now. The specific location in Nashville he and his wife will be building new houses is in the Park Preserve neighborhood of Nashville.

They will be volunteering their time alongside other future Habitat homeowners and other volunteers. Prior to breaking his hip, Carter was leading the 2018 Carter Work Project in Mishawaka, Indiana.

Carter is no stranger to health issues, but nothing will hold him back!

Of course, after breaking his hip, Carter was advised to be on bed rest until he was fully healed up. He did so, which put a hold on teaching classes at Sunday school as well. However, less than a month into recovery, he was back at Maranatha Baptist Church. He is seriously on the go!

Carter is no stranger to health issues trying to hold him back. In 2015, he was diagnosed with cancer after doctors detect 4 spots of cancer had spread to his brain. He would initially believe that he had very little time left, but thankfully, has clearly overcome those health issues! He is one strong man.

We hope for well wishes and good health towards this lovely couple! Best of luck in their humanitarian mission!

Learn more about the $167,000 Georgia house that Jimmy Carter built before he was President.

Previous article: 11-Year-Old Girl Singing Elvis Tune Sounds Just Like The King Himself
Next Post: Dog Chapman Says Some Of His Kids Are “Barely Making It” After Beth’s Death