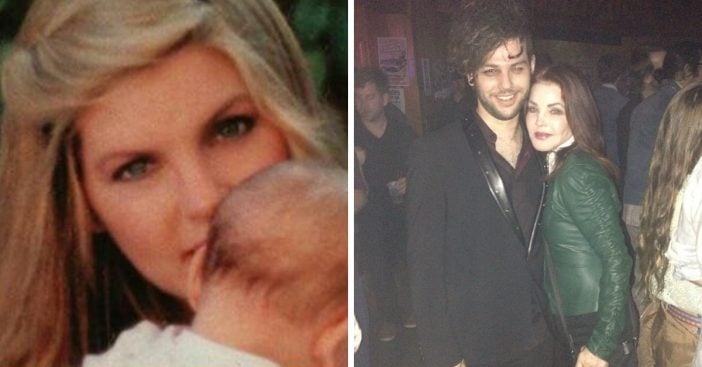 Most people know that Elvis Presley married Priscilla Presley and they had their daughter Lisa Marie shortly after. What many people forget is that Priscilla went on to have another child after Lisa Marie. Priscilla began dating Marco Garibaldi in 1984 and were together until splitting up in 2006.

During their time together, they never got married but they did have a son. Their son’s name is Navarone Garibaldi. Lisa Marie was 21 years old when her mother gave birth to Navarone in 1987. Lisa Marie would start having children just two years later! Interesting that Priscilla and Lisa Marie had kids around the same time.

Photo of Priscilla and her son Navarone

Navarone is now 32 years old. He is currently the lead singer and plays guitar for the band Them Guns. The band performs at smaller venues around the United States. They are described as more of a psychedelic rock band. Check out their music in the video below!

It seems Priscilla and Navarone are very close and she has been very supportive of his music career. Many people don’t realize that Priscilla had another child because it was so long after she had Lisa Marie. Navarone’s father is not as famous as Elvis either.

Navarone has some interesting pets

Reportedly, even though he is in a band, Navarone tends to keep to himself. However, Wikipedia shares a fun fact about Navarone. Navarone is a reptile lover and collects reticulated pythons and Asian water monitors. Check out a photo of one of his pythons and his mother below!

Many times, when Priscilla is interviewed, people want to know about her time with Elvis. Perhaps this is why Lisa Marie comes up so often, and people forget about her son. He was born a decade after Elvis had passed.

Did you know that Priscilla Presley had another child? Did you realize that he was all grown up and in a band now? Watch a music video from his band Them Guns below:

Priscilla thinks that Lana Del Rey should play her in the new Elvis biopic!