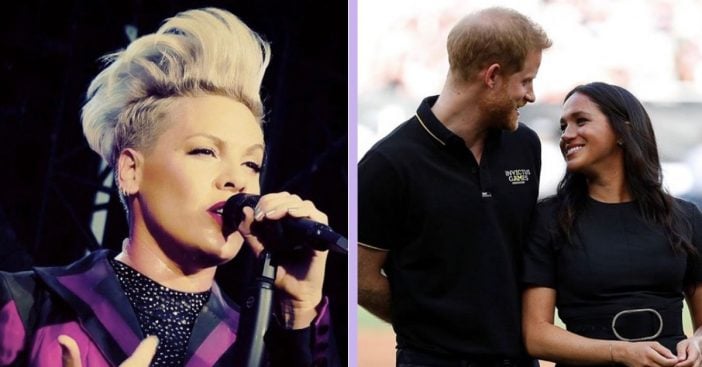 Meghan Markle and Prince Harry have recently been under fire for their decision to use a private jet to travel to their vacation destination. With this outrageous public bullying, singer Pink has spoken out in defense of the Royal couple.

“I’m happy to see people coming to the defense of The Duke and Duchess of Sussex,” Pink writes. “The way people treat her is the most public form of bullying I have seen in a while. It’s out of control. Let’s all be a bit kinder, huh? Let’s show our children that it’s cool to be kind.”

News of the couple’s trip to Nice, France with newborn son Archie hit headlines recently. This is because the couple is choosing to use a private jet to get to their destination. People are mad because this apparently goes against their stance on protecting the environment.

A man named John that the couple was going to be staying with in France was the first to speak about the criticism. He says that not only did he provide the plane, but that it is also carbon-neutral. “I am deeply distressed by today’s distorted and malicious account in the press surrounding the Duke and Duchess of Sussex’s private stay at my home in Nice last week,” he writes in response to the outrage.

John continues, “After a hectic year continuing their hard work and dedication to charity, David and I wanted the young family to have a private holiday inside the safety and tranquility of our home. To maintain a high level of much-needed protection, we provided them with a private jet flight.”

“To support Prince Harry’s commitment to the environment, we ensured their flight was carbon neutral, by making the appropriate contribution to Carbon Footprint™,” he ensures.

Other celebrities share positive experiences with the Royal couple

It’s horrific and disturbing the way people hate her.

Personal friends and Pink weren’t the only ones who defended the Royal couple. Ellen Degeneres was very quick to defend them as well, sharing her first-hand experience with them. “Portia and I met Prince Harry and Meghan in England to talk about their work on wildlife conservation. They were the most down-to-earth, compassionate people,” Ellen shares.

Ellen ends the post with a striking familiarity to Pink’s message: “Imagine being attacked for everything you do, when all you’re trying to do is make the world better.”

We all hope that this outrage against the Royal couple calms down soon.

Pink is no stranger to standing up for herself and others. See how she stands up for toddler son after people shame his body in an Instagram post!