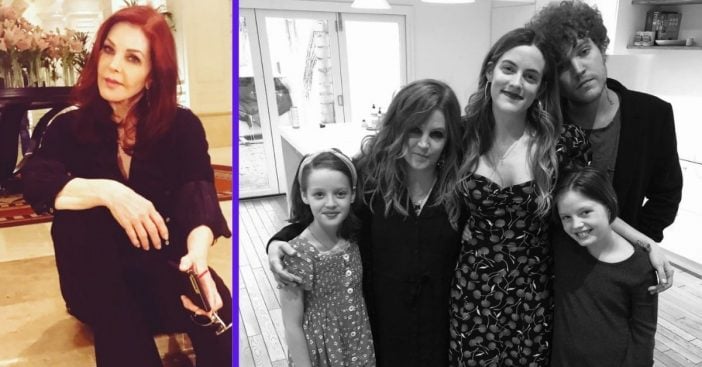 Lisa Marie Presley has been fairly quiet following the tragic news of her late son’s death by suicide. Benjamin Keough died at the age of 27 earlier this year, and a rep for Lisa Marie says that she’s absolutely devastated. Priscilla Presley also posted a statement to social media following the sad news.

“Trying to put all the pieces together of all the possible whys has penetrated my soul. Each day I wake up I pray it will get better,” Presley writes in a statement at the time. “I think of my daughter and the pain she is going through as she was a doting mother. Ben’s father, Danny, who is completely lost, as Ben was his only son. Riley, so loving and so close to him; Harper and Finley, who absolutely adored Ben. Navarone, who struggles deeply with loss and death. Rest In Peace Ben, you were loved.”

Navigating through son’s death together

According to OK Magazine, Priscilla has been doing everything she can to help her daughter and grandkids navigate through the loss. A source tells them, “The sense of loss has been unbearable. Priscilla is leading the charge making sure everyone is eating and taking care of themselves as best they can. It’s been such a blessing to have her in their lives.”

The report says that Priscilla has basically been by Lisa Marie’s side every day since Ben’s death. This all includes grocery shopping, taking care of bills, and looking after her grandkids. “For Priscilla, family is what matters most. She puts them first and doesn’t dwell on the past. She’s really been a rock to everyone around her,” the source adds.

That look when I realise @Instagram have finally verified my account. Have a great day everyone #bluetick #itsreallyme #verified

Priscilla herself is no stranger to hurt. Even though she split from Elvis in ’73, she was devastated when he died in ’77. It’s a situation that ultimately prepared her for Lisa Marie’s son’s death. “Priscilla feels like he’s always there with her, looking down and watching over,” the source shares, referencing Elvis. We hope that the family is holding it together and healing properly during this time.
Click for next Article