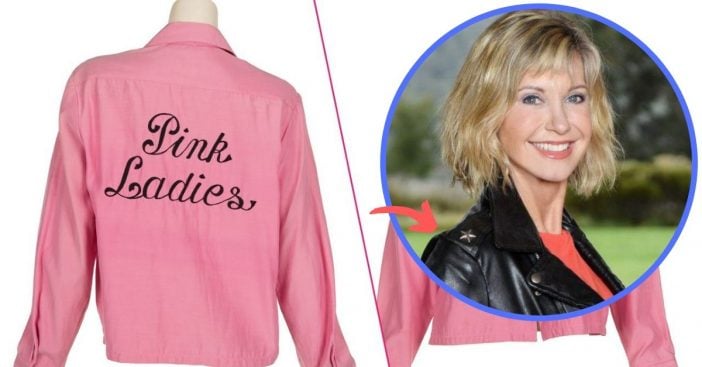 Olivia Newton-John, former Grease star, will be parting ways with over 200 costumes and memorabilia from the movie. She will also be parting ways with other memorabilia from the highest points of her career. Fans in the LA area may see the items on display from October 28th through November 1st at The Standard Oil Building Beverly Hills. The items will then be placed in a live bidding on November 2nd at Julien’s Auctions.

Newton-John will be donating a portion of the proceeds to the Olivia Newton-John Cancer Wellness & Research Centre in Melbourne, Australia. Take a look at some of the items that are up for auction!

This is the iconic motorcycle jacket that Sandy wore at the end of the movie when she sang “You’re The One That I Want” with co-star John Travolta. This jacket is expected to sell for $100,000 to $200,000.

This Pink Ladies jacket with the name “Sandy” monogrammed on the front will also be up for auction. It was originally given to Newton-John as a gift from the crew of the movie. It could be worth as much as $4,000!

Take a look at these super funky patterns! These denim bell bottoms were worn by the actress while performing “Have You Never Been Mellow.”