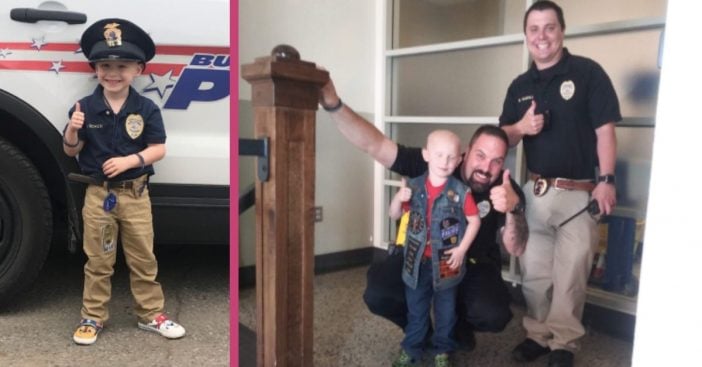 Butte-Silver Bow County in Montana has just welcomed its newest and youngest police officer and firefighter into the force! Four-year-old Michael “Hulk” Schow has always had a dream of becoming a first responder when he grows up. Now, he finally has the chance! Michael’s father details how the journey to this point has not been easy.

“Back in September, he had a little lump on his leg,” he explains. This turns out to be a rare form of childhood cancer known as Rhabdomyosarcoma. The 4-year-old is now going on his 8th month of chemotherapy.

“He’s had scans three times. His scans are every three months, and there’s no evidence of disease in all three of his scans, so he’s cancer-free right now,” Michael’s dad confirms. Throughout everything, he says his son has always remained positive.

“He’s always just bounced right back, and he’s had five different surgeries on the same exact day.” Sounds like Michael has and will remain strong through it all! Just this week, Michael was able to test out his new role on the force by arresting his first “bad guy,” according to NBC Montana.

Sheriff Ed Lester says that little Michael is an inspiration to all of them. “He has tremendous courage, and that’s the thing that makes the world go round in this business,” he says.

Michael’s dad said none of this could’ve happened without support from the community. “This is really amazing how everybody did this for him. This is his dream right here,” his dad says.

We are so happy to see a little boy have his dream fulfilled of becoming a first responder! What an incredible story and opportunity for everyone involved.

This is not the first time a child with cancer has become an honorary first responder. Take a look at the video below of a 6-year-old girl with incurable cancer being sworn in as a police officer. She says she wanted to become a cop so she can fight the “bad guys in her body.”

Chip and Joanna Gaines recently made a huge donation and build a custom playhouse for St. Jude’s Children’s Hospital. Take a look at the photos from the event!

Previous article: Lucie Arnaz Talks About Her Favorite ‘I Love Lucy’ Episodes
Next Post: The Story Of A Woman Giving Birth During The Camp Fire Will Become A Movie Called ‘Paradise’