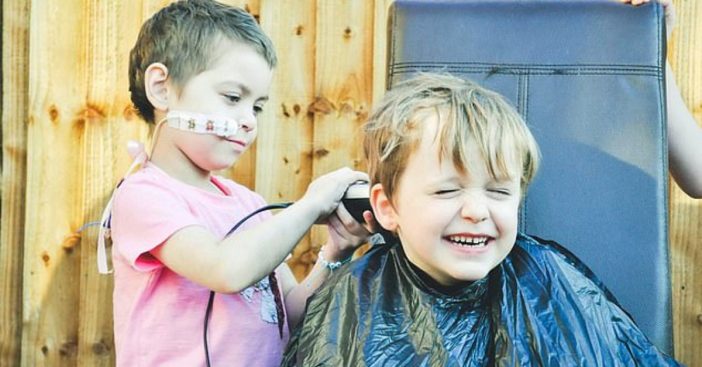 When Lulu DeVries was diagnosed at just 6-years-old with a rare cancer called high-risk neuroblastoma, her parents were devastated. It’s a type of cancer that mostly affects children, and it starts out slowly. Her parents began noticing that Lulu was constantly fatigued and would even fall asleep in class. She was shown to be anemic and started taking iron supplements.

After problems persisted and her fatigue worsened, she was sent to a local hospital where after many tests were performed, they discovered the rare, cancerous tumor on her kidney the size of a grapefruit.

“We heard the words that no parent wants to hear – your child has cancer. It felt like a dagger. The first few days after the diagnosis were a total daze,” Lulu’s father, Rob, said.

The type of cancer Lulu developed was from nerve cells in the fetus called neuroblasts. After birth, the neuroblasts usually develop as normal, but in some cases like Lulu’s, they came become cancerous and turn into neuroblastoma. In Lulu’s case, her tumor had been silently growing for quite some time after birth.

Unfortunately, since Lulu’s cancer was already at high-risk, it meant that the cancer had already spread to her bones, bone marrow, and lymphatic system. This meant that she would not be a candidate for surgical removal, so she began treatment of chemotherapy, other types of surgery, a stem cell harvest, stints in isolation, and radiotherapy.

Lulu went through 11 rounds of chemotherapy before her parents were informed that her cancer was shrinking, making her a candidate for surgical removal of the tumor. She ended up having 95% of the tumor removed, followed by 17 doses of chemotherapy per week. Doctors are hopeful that immunotherapy will leave Lulu cancer-free, but with that there’s still a 50% chance she could relapse.

However, there might be successful treatment outside of the UK (where they’re located)

Lulu’s parents found what might be a successful treatment in New York, called the bivalent vaccine. The vaccine has shown to be promising in preventing a relapse. “Before it felt like we were walking into a casino and betting everything on a 50/50 chance,” Lulu’s dad says, “But after being told that we felt the odds were more in our favor but unfortunately it comes at a price. But cancer leaves you with no choices.”

However, the trial for the vaccine is £162,000 (almost $215,000 in the U.S.). That’s when Oisín, Lulu’s best friend, took it upon himself to lend a helping hand. He decided on shaving off his hair to raise money for Lulu’s treatment.

Oisín’s fundraising goal was £2,000, despite his parents urging him to go with an easier target of £100. But the boy persisted, and had Lulu do the honors of buzzing off his hair. “I look like you now!” Oisín said when Lulu was finishing buzzing his hair.

The young boy actually ended up raising £2,800, greatly surpassing both goals! “It was a special moment. He’s a determined young boy,” said Lulu’s dad, “At other fundraisers, he’d go up to people and tell them what he was doing and then come back to Jo and say ‘Here you go, mum. Here’s another fiver’.”

In the meantime, with Oisín’s best efforts, Lulu’s family has also set up a JustGiving page to help raise even more money for Lulu’s treatment. As of this time they are about 34% there! You can check out the page and donate to help Lulu receive treatment in New York!

“She has been so brave, she is our little hero. But we’ll do anything to save our daughter’s life and prevent a relapse.”

Check out the full video of Lulu shaving her best friend’s head below: