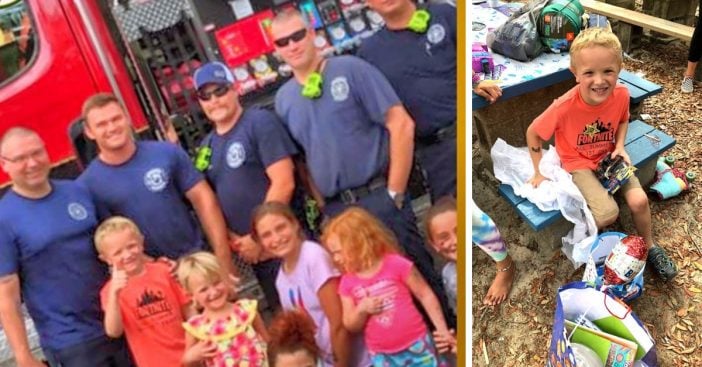 Colten Raymer was the new kid in class, but he still wanted to invite all of his new friends to his birthday party. Colten was so excited for his 7th birthday. He helped his mom, Meagan, design and write the invitations, get gift bags for attendees, and get the entire party ready for his classmates.

He gave invitations to all of his classmates, but then a week went by and Meagan didn’t receive any RSVPs. This had her worried that no kids would show up to Colten’s birthday party. Meagan is a young mom and they are new to Keystone Heights, Florida. Colten and Meagan recently moved from New York.

Meagan became worried when no RSVPs were coming in

Every day, Colten asked who had RSVP’d. It broke Meagan’s heart to say that no one had yet. She started becoming worried that no one would show up. On the day of the party, Colten was so excited! He chose a Fortnite (video game) theme for his party.

According to TODAY, Meagan said, “He was so excited. He had never had a birthday party with friends before, so it was a big deal.”

When they arrived at the party venue and began setting up, time kept passing and no one showed up. Colten, obviously, started to get upset. Meagan’s mother told her she needed to do something to make it right.

So, Meagan posted on the Facebook page for Keystone Heights and asked if anyone would want to stop by the party with their kids.

Within 15 minutes, friendly neighbors started appearing. Over 60 people came to Colten’s birthday, including local firefighters and police officers! Even teenage boys showed up to say hi and wish Colten a happy birthday. How sweet is that?

Meagan said, “Colten couldn’t stop smiling. He was so thankful.” She continued, “I was overwhelmed by how the community stepped up to help us. We’re new here. We’ve kept to ourselves. “It shows you how good people are.”

Colten said that it was his best birthday ever! We are so glad that things turned around and their community gave Colten the party of his dreams. Happy birthday, Colten!

Got birthdays on the brain?

Learn more about some of the most interesting royal traditions for birthdays!

Previous article: There Is Only One U.S. State Capital That Doesn’t Have A McDonald’s
Next Post: Watch This Dad Playing The Sax For A Crowd Of Very Appreciative Cows