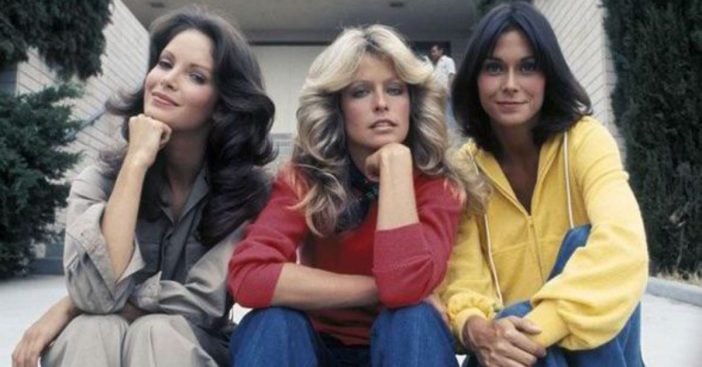 A Charlie’s Angels reboot will be hitting theaters later this year! The reboot stars Kristen Stewart, Naomi Scott, and Ella Balinska in the very first trailer for the revival. Stewart, Scott, and Balinska play Sabina Wilson, Elena Houghlin, and Jane Kano respectively. According to reports, the trio will be on an assignment to handle some dangerous new technology.

The film is under the direction of Elizabeth Banks. She will also appear as one of several of the film’s characters, Bosley. Sam Claflin, Djimon Hounsou, and Patrick Stewart have already been cast as the three other Bosleys. Nat Faxon is to play the role of Charlie.

Do you remember the original ‘Charlie’s Angels’?

The original Charlie’s Angels starred Kate Jackson, Farrah Fawcett, and Jaclyn Smith. It was initially a crime drama television series from September 22nd, 1976, to June 24th, 1981. The original show found great success before season 4, where ratings continued to fall before an eventual cancelation of the show.

However, its popularity had not completely vanished. Several spinoffs were made after the show’s cancelation. This includes feature films, a subsequent spinoff called Toni’s Boys, crossovers, and more.

Banks has also spoken about one of the film’s characters, Bosley, in correlation with the original Charlie’s Angels. She says:

“We have multiple Bosleys in the movie… We take the entire historical context of Charlie’s Angels, which was founded by Charles Townsend in the ’70s, and we treat it all as canon and we bring it all into this movie. The only character that had the same name the whole time, but was played by different actors in all the iterations, was Bosley. So I thought why don’t we make that a rank instead of like the actual character name. So like I’m a Bosley, Patrick Stewart’s a Bosley and Djimon Hounsou. We’re still the handlers.”

Singer/songwriters such as Brian Tyler, Miley Cyrus, Ariana Grande, Lana Del Rey, and Max Martin are also working on the music for the film’s soundtrack. You can hear a sneak preview of the music by watching the first official trailer below! The film will be hitting theaters on November 15th, 2019.

There was a recent reboot of All in the Family and The Jeffersons.

Check out what Marisa Tomei (who played the role of Edith Bunker) initially thought when she was asked to do the reboot!