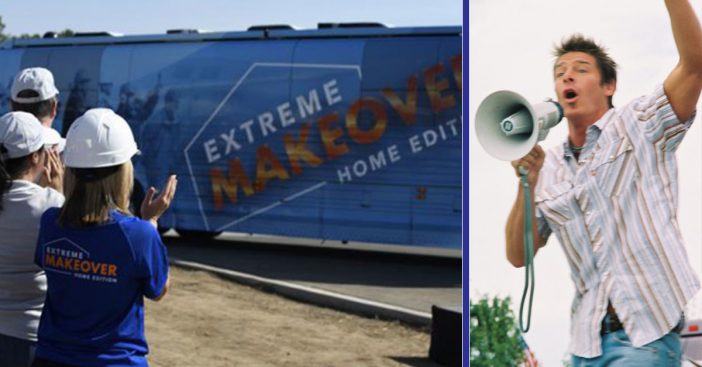 Extreme Makeover: Home Edition fans have been waiting for their favorite show to come back, and now the reboot trailer is finally here! We can finally get a sense of what to expect from the reboot. HGTV posts the trailer on their official Twitter account, saying, “Something we can all agree on this Thanksgiving is that Extreme Makeover: Home Edition is going to be amazing.”

Their tweet also reveals the season premiere date of Sunday, February 16th, 2020 at 9/8c. So be sure to mark your calendars! The trailer features the show’s host, Modern Family star Jesse Tyler Ferguson. He’s in charge of being able to tell struggling families that their homes are going to be completely renovated.

Check out the ‘Extreme Makeover’ reboot trailer below!

Something we can all agree on this Thanksgiving is that Extreme Makeover: Home Edition is going to be amazing. 😭❤️ Mark your calendars for the season premiere on Sunday, February 16 at 9|8c. #HGTVExtreme @extremehome

The show’s designers will be creating customized homes for each family based on their specific needs. The designers are Breegan Jane, Carrie Locklyn, and Darren Keefe. As each stunning home is revealed, it evokes just as much emotion in the viewer as the family receiving the new home! “It’s such a privilege to be able to meet people who need something and be able to give them that thing that they need,” Ferguson says.

The original Extreme Makeover: Home Edition would air from 2003 to 2012 with host Ty Pennington. Pennington will actually be returning to the reboot as a guest star on the new series!

Other celebrities to guest star on the new show

Other stars to make appearances on the show include HGTV stars Tarek El Moussa, David Bromstad, Tamara Day, and Jasmine Roth, Black-ish star Anthony Anderson, formerly Dancing with the Stars‘ Derek Hough, and country singer LeAnn Rimes. We are so excited to watch the reboot of this awesome show!

TMZ catches up with Ty Pennington in the video below, as he gives Jesse Tyler Ferguson his blessing to continue the show. His advice to the new show’s host? “Rest up!”

Click for next Article
Previous article: Hoda Kotb And Savannah Guthrie Sang “Jolene” In Front Of Dolly Parton
Next Post: Blake Shelton Sings Christmas Song He Wrote With His Mother