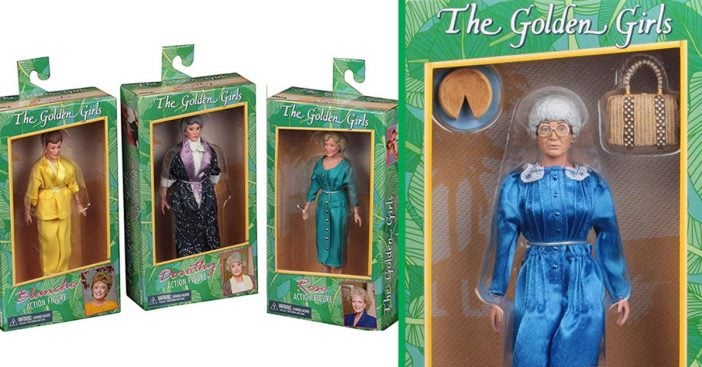 However, The Golden Girls is one of the most popular vintage sitcoms. Fans are flocking to buy Golden Girls-themed accessories and nostalgia items. All of this talk about The Golden Girls just makes me want to re-watch the show! But, first, let’s take a look at their action figures.

Take a look at the ‘Golden Girls’ action figures

Rose (Betty White) seems to look the most like the real-life character, perhaps because she is still alive and very present in our culture. The figures are about 8-inches and have pretty generic body types. In fact, Dorothy’s (Bea Arthur) uses a man’s upper body with a padded bra, likely because she was so much taller than the other ladies.

Sophia (Estelle Getty) is the only figure to come with accessories other than clothes. She comes with a cheesecake with one slice removed and a handbag that opens up.

The company NECA created these action figures and they are heading to Target. NECA realized that many action figure collectors simply want to collect their favorite characters and showcase them.

I couldn’t find the action figures on Target’s website just yet, but they are being sold on Amazon! They are going for around $34-$40 each, so they are not exactly cheap for their small size. However, big fans and collectors will probably pay just about anything for their favorite Golden Girl.

Click here to purchase the set of Golden Girls action figures or if you prefer to purchase Rose, Sophia, Dorothy, and Blanche separately, you can click on their names to be directed to Amazon. Do you think they look like the real-life characters or are they way off?

Want more Golden Girls-themed merchandise for yourself or a fan in your life? We gathered a list of the best items here, and they include themed-wine glasses!