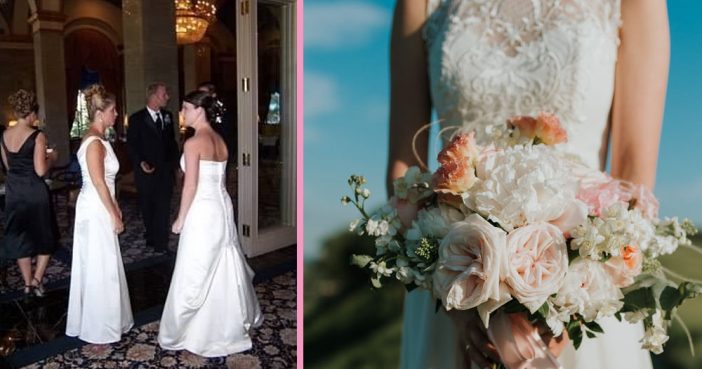 Recently, nighttime talk show host Jimmy Fallon asked his Twitter followers to share their #WeddingFail stories. One woman named Amy Pennza’s story shocked many Twitter followers. She said that her mother-in-law actually wore a wedding dress to her wedding! Wearing a white dress to weddings is a big no-no and people couldn’t believe this story.

Amy tweeted, “My mother-in-law wore a wedding dress to my wedding. So, yeah, top that one, Twitter.” She also included a photo of herself and her mother-in-law on the wedding day. They appeared to be wearing matching white gowns.

Amy got tons of responses of people who were shocked and agreed this was the biggest #WeddingFail ever. Many asked for more details, so Amy supplied the entire story and shared her true feelings on her mother-in-law and how their relationship is today, many years later.

She said she doesn’t remember much about the day, but she does remember saying this to her mother-in-law when she saw what she was wearing. She said, “You… You could be the bride…”

So, a couple people have asked for the story behind The Dress. Sorry for the delay! I have four kids (yes, I married him) on summer break, so my permanent state of being is "frazzled." I called my daughter "mom" the other day.

However, she said that the wedding went on without “bloodshed, or anyone being shoved into the champagne fountain.” Amy also admitted that she doesn’t really blame her mother-in-law because she grew up in extreme poverty and is consequently very frugal.

Her mother-in-law got the white dress at an extreme bargain but now feels terrible about wearing it. Now, the two have a great relationship. Amy has four children and said her mother-in-law is a great grandma and they have put the incident behind them!

So, yeah, the wedding dress was a shock. But it gave me a pretty funny memory. No one who attended has ever forgotten it. And, you have to admit, weddings can be forgettable.

Amy then said, “When my twins were newborns, she drove across town every night, slept on the sofa, and did three feedings. For two babies. Every night for months. She’d walk over hot coals for her grandchildren. She gives them everything. Because, you know, she grew up with nothing.”

Lastly, she wrote, “Sure, she wore a wedding dress to my wedding. But she has more than made up for it since. When I told her about this getting a lot of attention, and said I was worried it might hurt her feelings, she waved it off. ‘Whatever makes me famous.’”

What do you think about this story?

One photographer revealed the things they saw at weddings which told them the couple would eventually get divorced… yikes!

Previous article: Take A Look At The World’s Largest Pyramid Made Of Pennies
Next Post: An Archive Of Elvis Presley Letters From The 1950s Are Going Up For Auction