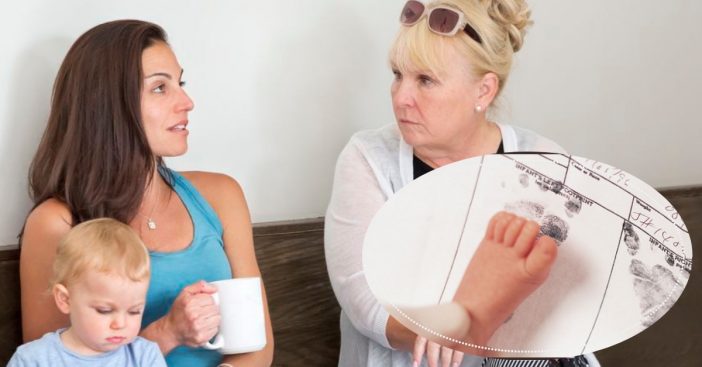 Mothers-in-laws are often included in the birth of their grandchild and always want what’s best for them. Of course, with the birth mother’s understanding and permissions. One mother-in-law crossed this line by taking it to the next level… or should we say the next category, because it’s pretty excessive.

One mom has revealed that she recently discovered her mother-in-law had changed her newborn baby’s middle name while she was asleep and recovering from a C-section. The mom didn’t find out about this until two months later. She wrote about this in an advice column letter to Slate. Take a look below.

Read this one angry mom’s letter to Slate below:

My son is 2 months old, and I just discovered my husband spelled our son’s middle name as “Finlay” instead of “Finley” on all of his legal documentation. I, of course, am furious, because I told him I was fine with the middle name but it had to be spelled Finley—and he agreed before our son was ever born.

His mother even sent a Christmas gift to middle name “Finlay,” and when I made a comment to my husband he didn’t even have the decency to tell me! He just let me keep believing for two months that our son’s middle name was spelled Finley when it legally isn’t! I discovered this all when I went looking for his Social Security card and birth certificate to file them away properly. He says he regretted it as soon as the card came and has been afraid to tell me.

Now here is where it gets tricky. Apparently his mother guilt-tripped him into doing this while I was asleep after my emergency C-section. Keep in mind she lives a few states away, so this was all over the phone. She tried to convince him to give our son a first name that I very much hated, saying that I would “get mad, but get over it.” My husband thought changing his first name was too much but apparently gave in to spelling his middle name the way his mom wanted. She thinks that “Finlay” is more masculine than “Finley.”

I will be legally changing my son’s name to the correct spelling.

The advice column writer responded, but not without having a few choice words for both the mother-in-law and the husband involved. Most importantly, the writer confirmed that this woman’s husband owes her a ‘significant and full-throated apology’. Furthermore, the writer calls it a situation of serious distrust and wishes the new mom luck on her journey in addition to giving her other advice.

What we know for sure is, that columnist is definitely right in her advice and we hope this mom gets things straightened out. You can read the full column here.

Be sure to SHARE this article with your thoughts on this crazy story!

Let’s switch gears for a moment and check out the adorable video below of this newborn making cute, silly faces: