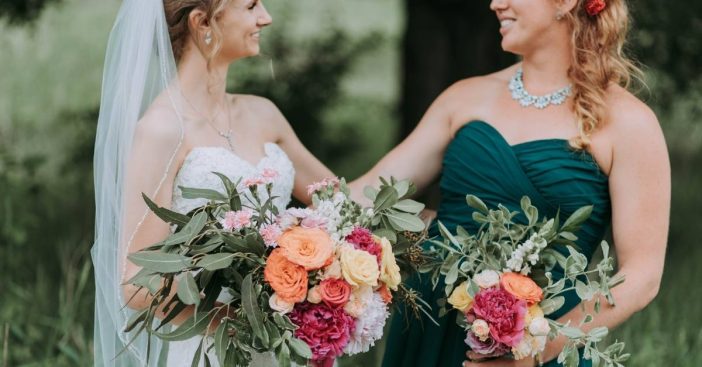 It is generally known that guests at a wedding are not supposed to wear white clothes due to the bride wearing a white dress. It came as a rude shock to one certain bide when her mother-in-law chose to step out to her wedding in the same dress.

It is almost impossible to distinguish the bride judging from a picture shared on Reddit by the bride showing the groom, his mom, and the bride herself. The woman captioned the picture with: “MIL [mom-in-law] really wanted to be bride. I’m now divorced from her son, who she posed with in the second picture.”

Both pictures were blurry so as to keep the identity of the people in the picture confidential.  A number of people have reacted to the post, and most of those who viewed the picture had trouble knowing which of the women was the bride.

RELATED: Couple Has Just A $500 Wedding With Only A $47 Wedding Dress

In a reaction by one of the viewers, he wrote. “Without the bouquet, I would not know who was the bride.”  “So creepy! I’d be interested in how it all ended, but I guess his mom dressing up as the bride at her son’s wedding was not a good start,” another user commented. However, one of the users wrote hilariously, “I really thought I  scrolled past a polygamist wedding.” The bride, on the other hand, found the whole situation hilarious.

This is not the first time it happened

Mother-in-laws committing the ultimate wedding crime of wearing white or a wedding dress to their son’s wedding is not a new thing. According to a story posted on Lifestyle on November 2, 2021, a mother-in-law decided to punish the couple for telling her that her originally-planned dress for the wedding was inappropriate.

As a punishment, she showed up to the wedding wearing her own wedding gown. The bride, while relaying the story in a Reddit post, stated, “she had gotten married a year and a half before us, so it wasn’t like she pulled some 80s wedding dress out of a box. This was actually gorgeous, thankfully cream, not white, and it definitely stood out at our fairly simple wedding. I was very upset.”

USA Today best-selling author of paranormal and contemporary romance Amy Pennza has also been a victim of such display by mothers-in-law. Responding to a tweet by Jimmy Fallon who asked people to share their greatest wedding fails, Penza shared, “The summer I got married, there were a lot of weddings in our family. My sister-in-law got married in July, mine was in August, and my husband’s close friend tied the knot in September. My mother-in-law was invited to all of them. So she had to buy three dresses for the weddings, plus outfits for all of the showers and parties that also come along with it. When it came time for my wedding, I didn’t even think about asking her what she was going to wear. On the day of my wedding, I was getting ready in a little chamber at the church with my bridal party,  then my mother-in-law walked in, wearing a wedding dress.”

Click for next Article
Previous article: Janet Jackson Responds To 88-Year-Old Dancing To “All For You”
Next Post: Don Rickles Roasts Jerry Lewis In Hilarious 10-Minute Comedy Stand-Up From 1971