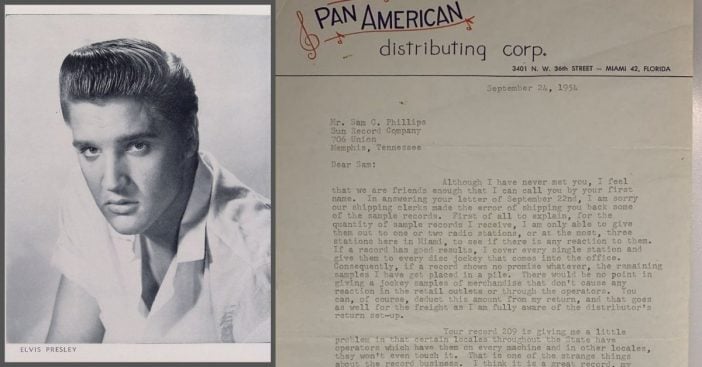 An archive of letters chronicling Elvis Presley’s career with Sun Records is going up for auction in the UK. The letters acquired directly from Sun Record Company in Memphis span from July 1954 to December 1955. Auctioneer Andrew Aldridge says that these letters depict some of the most important parts of Presley’s musical career.

The letters even include a rejection letter from an LA record company. The rejection letter claims that “Elvis Presley records would not sell in Los Angeles”. How crazy is that knowing what we know of him today?

The letters from the Elvis Presley archive

“It relates to the earliest part of his career at Sun Records and the release of his first record ‘That’s All Right Mama’,” Aldridge says to Fox News about these letters. He also notes that just nine months later, he releases “Heartbreak Hotel,” an Elvis Presley classic.

The original distributor says (in the letter), “I think it is a great record, my immediate reaction in Miami was good but in the northern part of Florida, they won’t touch it as they consider it too racy.” This is about his record “That’s All Right Mama,” which had great difficulty getting distributed initially.

July 29th, 2019 will officially mark the 65th anniversary of the release of “That’s All Right Mama.” These 1950s letters cover all 10 Presley songs that were released through Sun Records. The archive of letters has a presale price of $50,981 to $63,727. They will be auctioned off by Henry Aldridge & Son on Saturday, June 22nd.

We wonder who will end up with these historic and interesting letters!

Check out the video below from three years ago of an auction displaying Elvis Presley memorabilia. Very cool!

Speaking of Elvis Presley, one man has come forward claiming he may be the late singer’s grandson!

The Voice and America’s Got Talent contestant Dakota Striplin shares why this claim may be true! Take a look.