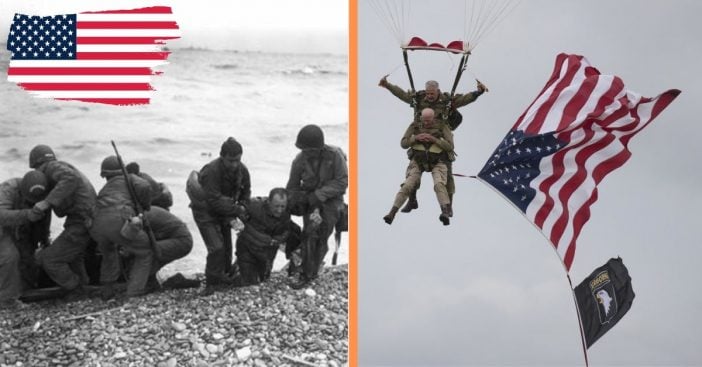 Today marks the 75th anniversary of D-Day, otherwise known as the day in World War II history where Allied forces invaded northern France by means of beach landings in Normandy. Tom Rice, who is 97 years old and a veteran of D-Day, returned to Normandy once more to parachute out of a plane as he did 75 years ago.

The former paratrooper yelled “Woohoo!” upon landing after he jumped out of the plane. He jumped alongside many others to mark the 75th anniversary of D-Day.

Commemorating the 75th anniversary of D-Day

“It went perfect, perfect jump,” Rice said about the experience, “I feel great. I’d go up and do it all again.”

Rice, who lives in San Diego, CA, originally served in the U.S. Army’s 101st Airborne Division 75 years ago and he was part of the paratrooper operation during D-Day. His job was to disrupt the German forces and to aid the invasion on Normandy’s beaches. While Rice jumped out of plane during mid-day when the sun was out and shining, he originally had to jump out of the plane in sheer darkness back in 1944. He still calls it the “worst jump I ever had.”

“I got my left armpit caught in the lower left-hand corner of the door so I swung out, came back and hit the side of the aircraft, swung out again and came back, and I just tried to straighten my arm out and I got free,” Rice told The Associated Press about his original jump in Normandy.

Thankfully, the jump that Rice just took to mark the 75th anniversary of D-Day went much, much smoother than the original jump. “They would love it,” Rice says of his comrades who served with him in the Army. “I represent a whole generation.”

See the astounding photos from the original D-Day

The photo above details members of a landing party helping injured U.S. soldiers to safety on Utah Beach on D-Day.

The photo above shows U.S. soldiers venturing through both rough surf and German gunfire.

This heartbreaking photo shows U.S. soldiers of the 16th Infantry Regiment, wounded and waiting for proper evacuation to a hospital for treatment.

This photo shows the moment where the German troops surrender to the U.S. soldiers.

Can you believe these photos? Don’t forget to check out the video of Tom Rice, the 97-year-old veteran, parachuting into Normandy. Very cool!

All of us at DYR love our veterans and anyone currently serving in our nation’s military.

Check out this 97-year-old veteran who also served in World War II. He is currently still working hard at a New Jersey grocery store and everyone loves him!

Previous article: Dolly Parton Always Sleeps With Her Makeup On — Here’s Why
Next Post: Great News! Gas Prices May Fall As Low As $2 This Summer