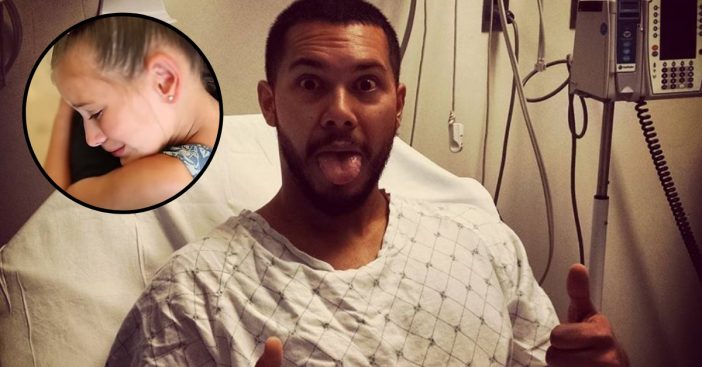 A U.S. Army veteran named Mike Laureano continued to save lives when he returned home. After serving eight years in the Army National Guard and being in Iraq from 2009 to 2010, he returned home and began taking classes at Wilmington University. He saw a Be The Match sign-up table while walking to class one day.

According to their website, Be The Match “helps thousands of people diagnosed every year with life-threatening blood cancers like leukemia and lymphoma because a cure exists. Over the past 30 years Be The Match ®, operated by the National Marrow Donor Program ® (NMDP), has managed the largest and most diverse marrow registry in the world. We work every day to save lives through transplant.”

Mike heard what the organization did and saw how easy it was to sign up. All he had to do was give some information and get a cheek swab on his way to class. So he did. He hoped he would match with someone, but knew that his mother had been on the same registry for 25 years without matching with anyone.

However, almost a year after he signed up to be on the registry, he got a call about being a potential match with a little girl who had leukemia. There was no hesitation, especially when he heard that she was only about 4 or 5 years old. Mike had a niece around that age at the time and couldn’t imagine her going through something so awful. He knew he had to help.

Mike went in for additional testing and found out that he was a perfect match for this little girl he had never met. A few months later he donated bone marrow to help the girl who lived over 2,000 miles away. The little girl was named Adriana Aviles and he saved her life.

Donors and recipients aren’t allowed to contact each other for a year after the surgery. However, as soon as she could, Adriana’s mother got Mike’s contact information so she could thank him properly for saving her little girl’s life. They ended up meeting and even though Adriana is so young, she knew that Mike saved her life.

Mike hopes that his story can help others have the courage to sign up to be a donor too and save lives. Be The Match also started using a custom registration link to track all the people who sign up after being inspired by this story gone viral. Not only did Mike save one life, but he may also have inspired others to do the same.

If you are interested in learning more about bone marrow donations, please visit Be The Match’s website. If you found this article inspiring, please SHARE with your friends and family!

Previous article: The Monkees Just Released A New Music Video For “The Christmas Song”
Next Post: Macaulay Culkin Just Recreated A Bunch Of ‘Home Alone’ Scenes For A Hilarious Commercial