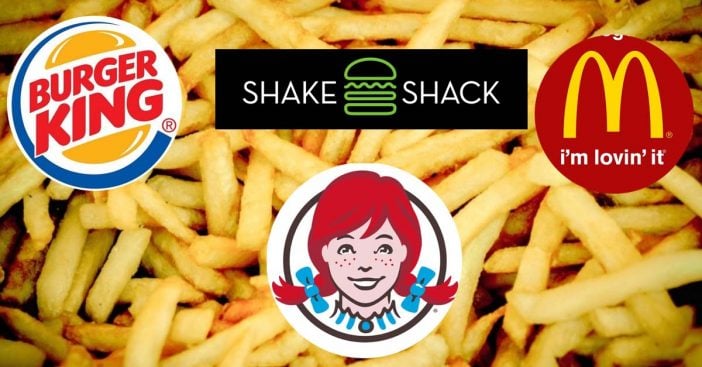 Think of the French fries from Arby’s, Five Guys, Wendy’s, Dairy Queen, Chick-fil-A, McDonald’s, Shake Shack, and Burger King. Which fries are your favorite? Irene Jiang from Business Insider decided to taste test all of these French fries and determine which ones are the best. Her answer might surprise you.

French fries are so delicious and nothing beats a fast food French fry. Even the people who don’t eat fast food regularly probably can’t resist a fry here and there. They go really well with burgers, chicken, or even milkshakes.

Learn the categories Irene tested the fries in

Irene tested the French fries and rated them in four different categories including crispiness, flavor, mouthfeel, and salt. She didn’t use condiments and ordered a standard medium fry order from each fast food joint.

First, she tried Chick-fil-A’s waffle fries. She found them to be stiff, yet sometimes soggy with not enough salt. Next, she tested Dairy Queen. She said that looked pale and didn’t necessarily taste bad, but they were a bit soft and undercooked.

Then, she went to Wendy’s to try their fries. The ones she got were very undersalted, but overall had a nice potato flavor and were mostly crispy. She did say some weren’t crispy and had a processed aftertaste.

After Wendy’s, she hit up Five Guys, known for their burgers. They advertise using freshly cut potatoes. However, they weren’t that flavorful. Even though they tasted fresh, they just weren’t crispy and salty enough.

Then came the classic McDonald’s vs. Burger King debate. Fans of each restaurant generally have a die-hard love for the fries. They also both have a very distinctive taste that lets you know where you are getting your fries. Irene found the Mcdonald’s fries crispy and crunchy, but sometimes mushy.

She felt that Burger King’s fries had the perfect amount of salt. She didn’t taste any processed aftertaste and they were very savory. However, some were a little too soft. Then, she headed to Arby’s which advertises their curly fries, very different from many of the fries she’s already tried.

Who was the ultimate winner of the best French fry?

She loved Arby’s curly fries because they have some delicious seasoning. However, Irene said that Shake Shack’s fries stood out the most. They had the right amount of salt but were a little sweet. She named Shake Shack the winner of the best fast food French fry, with Arby’s and Burger King close behind.

Do you agree or disagree? Which fast food restaurant has the best fries in your opinion?