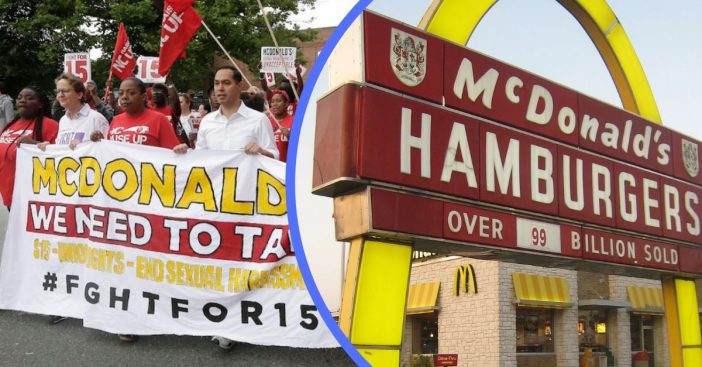 In current strike news, McDonald’s workers are the newest customer service employees to go on strike in protest of earning pay below a livable wage. Julián Castro, Washington Gov. Jay Inslee, and New York City Mayor Bill de Blasio have also rallied with the McDonald’s workers in 13 cities who organized a work stoppage to demand a $15 hourly wage and the right to join a labor union.

“We’re here to tell McDonald’s that it’s not acceptable to pay workers a wage they can’t live on,” Castro said to a crowd of McDonald’s workers. In addition to the demand for a pay increase and labor union, they also want to recognize the increased amount of sexual harassment and violence against workers.

Despite this news, it’s still unclear how many McDonald’s employees are taking part in this strike or if it’s causing massive disruption. What we do know is that some restaurants did have to end up closing their doors due to the strike. The strike was timed in part with the McDonald’s executives meeting for the company’s annual shareholder meeting this past Thursday in Dallas, TX.

Additionally, despite this being the first multi-city mass strike, fast food workers have been fighting for higher wages for years as part of the Fight for $15 movement. McDonald’s isn’t the only big name fighting for a better living wage.

Stop & Shop was another big name to go under fire with a massive 31,000 employee strike just a few months ago. Many locations were forced to cut their hours and service short as workers protested right outside their respective storefronts. They, too, were fighting for more livable wages including better healthcare benefits and pensions.

Stop & Shop employees and the higher-up executives soon agreed on a solution. Unfortunately, the strike caused a drop in visitors by up to 75%. Could this be the same fate for McDonald’s?

The company is currently locked in a dispute over whether or not it is technically a joint employer or not. McDonald’s has been quick to say that they are not a joint employer so that they cannot be held accountable for the several reports across 20 cities that women have filed over sexual harassment in the workplace.

Bleu Rainer, a McDonald’s employee from Tampa, FL, says, “We are just trying to earn a living wage like you,” to the executives who refuse to recognize their cashiers and cooks as real employees with a livable wage.

The real-time footage of these protests surely shows that McDonald’s workers are ready to make some noise and not back down.

Do you remember what McDonald’s looked like when it first opened? Relive the memories!