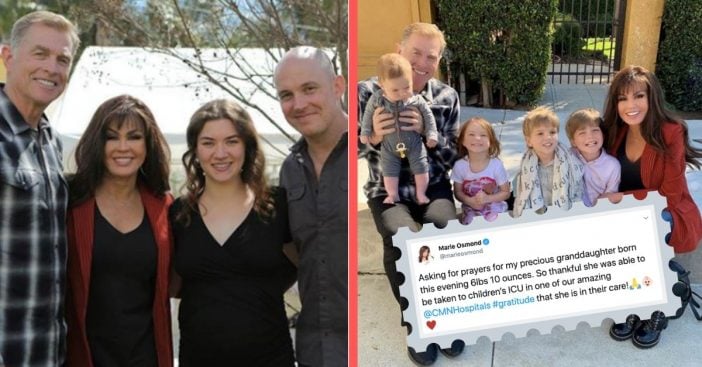 Marie Osmond has asked her large following for their prayers as her newborn granddaughter has been rushed to the NICU. Recently, Osmond revealed that her daughter Brianna Blosil Schwep, 21, and her husband Dave Schwep, 42, had given birth to a baby girl. However, the baby was born 6 lbs 10 ounces and was taken to the NICU in one of the Children’s Miracle Network Hospitals.

Osmond helped co-found the non-profit organization that raises funds for children’s hospitals, medical research, and community awareness of children’s health issues, so CMN hospitals are very important to her and her family.

Asking for prayers for my precious granddaughter born this evening 6lbs 10 ounces. So thankful she was able to be taken to children’s ICU in one of our amazing @CMNHospitals #gratitude that she is in their care!🙏👶🏻 ♥️

“Asking for prayers for my precious granddaughter born this evening 6lbs 10 ounces. So thankful she was able to be taken to children’s ICU in one of our amazing @CMNHospitals #gratitude that she is in their care!” Osmond’s message on Twitter said.

It’s still unclear as to why the baby was rushed to the NICU, but it was reported that the baby was born 10 days past her due date, so that could be a reason as to why. Her original due date was originally supposed to be May 13th.

Brianna and Dave first got engaged last November. The couple revealed the happy news on social media, posting a photo showing off their new rings. How sweet! “I am so honored and grateful to be engaged to marry my best friend and lover Brianna Patricia-Lynne,” Dave wrote on his Instagram post announcing their engagement.

The couple soon announced that they had tied the knot just a month after their engagement during a private, intimate ceremony. “Brianna and I committed to each other in a private ceremony with our parents. We look forward to a larger celebration with our friends and family in the coming year. I am so grateful to be sharing my life with such an amazing human,” Dave announced.

Just a few months after their private wedding ceremony, the two announced that they were expecting their first child together. The month following their pregnancy announcement would come a baby shower that would be displayed via photos on the family’s Instagram account. Osmond is already a grandmother of four and will be expecting a fifth granddaughter from her daughter, Rachel, in July.

She’s been extremely open and transparent about the love for her grandchildren!

Osmond has also talked about how much she loves being a mom of eight. We can tell she’s loving having so many grandchildren, too!

Did you know that Marie Osmond is taking Sara Gilbert’s chair on the show The Talk?