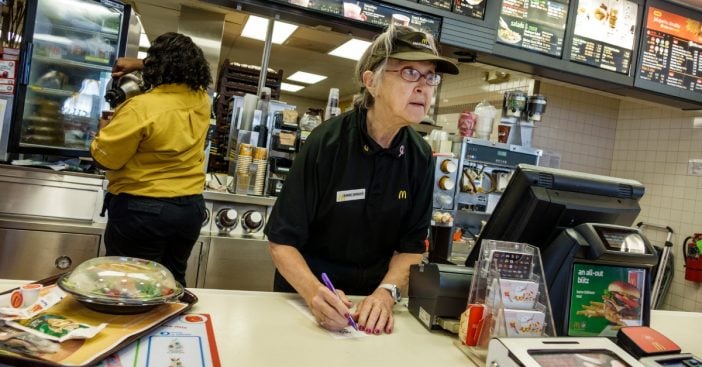 New reports from Bloomberg have concluded that older people are now replacing teenagers as employees in fast food restaurants. Franchises are hiring more and more senior citizens at a more consistent basis instead of hiring teens as a cashier or part of the kitchen staff for their first-time paying job.

The idea of teenagers working at a fast food place for their first real job has been a long-time reality for many people. One of my first paying jobs was as a cashier, so I totally understand! But now, job opportunities are being posted in senior community centers and even on the AARP website to find senior citizens who might have an interest in a part-time gig.

The question is, why are more and more companies preferring senior citizens over teenagers now?

Bloomberg points out the obvious answer to a long-asked question. These companies are beginning to realize that senior citizens have more of the skills needed to excel in the position, which most teenagers lack. However, these are things that are greatly based on the teenager’s upbringing and not based on work skills.

The two things teenagers lack nowadays are being on time and friendly communication with both staff and customers.

In addition to this, there seems to be a lot more interest these days in retired senior citizens wanting to work, even if it’s just a part-time job. They find themselves bored, wanting to make a little extra money, or just get out of the house.

63-year-old Stevenson Williams is a retired construction worker and now manages a Church’s Chicken in South Carolina. “It’s fun for a while, not getting up, not having to punch a clock, not having to get out of bed and grind every day,” Stevenson says to Bloomberg, “But after working all your life, sitting around got old. There’s only so many trips to Walmart you can take. I just enjoy Church’s Chicken. I enjoy the atmosphere, I enjoy the people.”

This is not only a great opportunity for senior citizens looking to work part-time, but it’s also a great opportunity for the company. By hiring senior citizens who are often not looking for a VP position or to be promoted at all, this means those companies can pay them at minimum wage, but still hire someone who has a ton of life and work experience under their belt.

Stevenson Williams says he often needs to coach his younger employees in basic manners. “A lot of times with the younger kids now, they can be very disrespectful. So you have to coach them and tell them this is your job.”

67-year-old Toni Vartanian-Heifner is a former teacher and says she works now for the social aspect of it and she only makes about $10 an hour. “I think I’m going to work for at least five more years,” she says. Senior citizens might be giving teenagers a run for their money! Literally.

Be sure to SHARE this article if you found this report interesting!