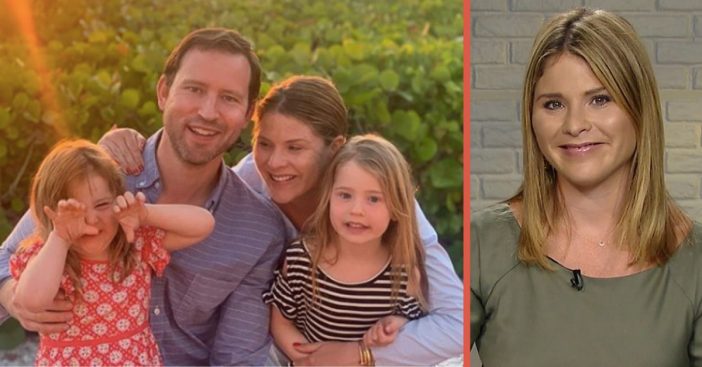 The 10 a.m. co-host of the TODAY show, Jenna Bush Hager, officially announced that she is expecting her third child! She dropped the news on her co-anchors that she and her husband Henry Hager are expecting, saying she is “very pregnant.”

“Yes, I’m pregnant!” the former first daughter revealed, “I’m very pregnant. I don’t know how you missed this! I’ve needed 7 or 8 sports bras…. It is a shock, it’s a lot. We’re grateful. … Henry needs the congratulations because he’s a little terrified!” She says that broke the news to her daughters Poppy Louise, 3, and Margaret “Mila” Laura, 6, on Easter Sunday.

.@jennabushhager has some *big news* to share… she’s pregnant! pic.twitter.com/eIWXsCEwhf

“I’m only telling because they found out yesterday in their Easter basket,” Jenna explained, “They told the man behind me on the airplane, they told the people at church … The girls are so happy.” Makes sense, she might as well come clean about the news live on air if her girls are already spilling the secrets!

She was also asked when she was due and if she knew what gender the baby would be, to which she responded that viewers would have to tune into the 10 a.m. hour of the TODAY show to find out. Clever marketing tactic, Jenna, clever.

Jenna says that she and co-host Hoda Kotb discussed the happy news before Monday’s reveal. This comes shortly after Kotb just welcomed a new addition into her family by way of adoption!

“I told Hoda and I was really worried about it because we’re starting this new show. And I told Hoda and she kind of had a glimmer in her eye,” Jenna explained. It’s clear that everyone’s more than excited about the news!

Jenna and her husband, Henry, celebrated 10 years of marriage last year. We are so excited for the newest addition to this family soon! Again, there may be some news as to when the due date is and what the gender of the baby will be, so be sure to tune in to the 10 a.m. hour of the TODAY show to get in the full scoop!

All of us at DYR will keep you updated with information as it becomes available.

Be sure to SHARE this article if you’re excited for the Hager family and their new bundle of joy arriving hopefully soon! We’re all hoping for more updates sooner rather than later. Congrats to the soon-to-be new parents (again)!

Check out the news coverage on this story below for more information:

Previous article: Service Dog Of Diabetic Teen Earns Place In School’s Yearbook
Next Post: ‘All In The Family’ And ‘The Jeffersons’ Are Getting A Reboot Special